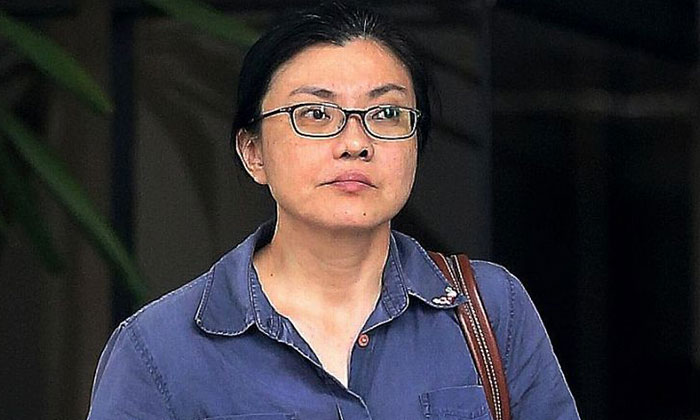 A nurse received 14 weeks’ jail on Wednesday (Jan 3, 2018)  after pocketing almost $27,000 in cash and cheque from a wallet found, and then attempting to bite an officer’s hand while she was being arrested.

Koh Sock Buay, 49, had found the wallet on a chair while walking past a coffee shop in Jalan Bukit Ho Swee on Jan 4, 2017.

She then mailed the identity card, casino membership, several ATM and credit cards as well as the wallet to the owner, Mr Lim Teck Hong, 54, in two envelopes.

On Jan 9, four days after she found the wallet, Koh attempted to cash in the cheque but failed, as Mr Lim had informed the bank not to accept it.

Unbeknownst to Koh, a closed-circuit television (CCTV) camera at Seafood Garden Coffeeshop had captured her taking the wallet.

The police traced her but when they contacted her via her mobile phone on Jan 10, she claimed she had not found anything and switched off her phone.

On Jan 11, the police went to her workplace and interviewed her.

Although she initially denied taking anything, she confessed after further questioning.

On Jan 12, she surrendered the cash to the police.

Koh received 14 weeks jail for dishonestly misappropriating a total of $26,822 and trying to bite the right hand of a police officer on May 16 when she was being arrested at Kim Seng Neighbourhood Police Post (NPP).

Assistant Public Prosecutor Lim Yu Hui told the court that Koh had attempted to hurt Station Inspector (SI) Jerald Chua Boon Yao that day when she had gone to the NPP for further questioning.

Si Chua had told Koh that there was a video recorder inside the NPP and asked her to take a seat.

Koh then insisted on visiting the washroom, but SI Chua told her to wait for a female officer to escort her.

During their exchange, Koh managed to slip her right hand out of the handcuffs.

SI Chua attempted to handcuff her again, but Koh resisted and held onto her right wrist with her left hand to pretend him from doing so.

When SI Chua tried to move her right arm back, Koh tried to bite his hand.

Koh’s lawyer, Gino Hardial Singh said in mitigation that Koh had a history of psychiatric problems and had an aversion to men after being abused by her father until a very late age.

He added that Koh suffers from dysthymia or chronic depression.

Koh’s jail sentence will start on Jan 31 to allow her time to settle her personal affairs.