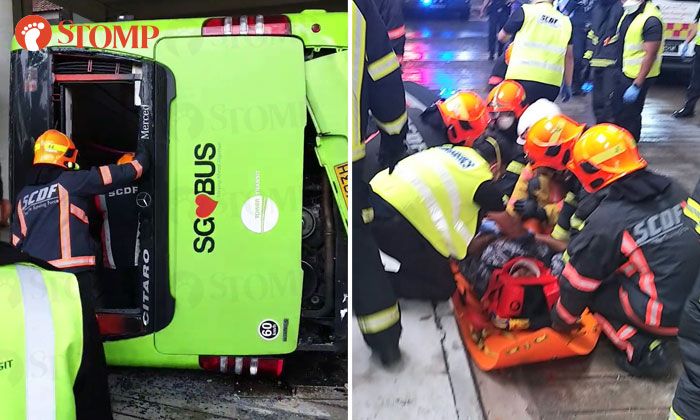 Bukit Batok bus collision: Bus driver arrested, most of those hospitalised have been discharged

A bus driver has been suspended after fourteen people were taken to hospital when two buses collided at Bukit Batok Interchange on Sunday (July 11).

In photos and videos shared by Stompers, one of the buses was lying on its side. A person is seen lying on the ground outside the bus as well.

Singapore Civil Defence Force (SCDF) officers and staff at the interchange are seen helping passengers out of the side-lying bus.

"Upon SCDF’s arrival, a passenger bus was found lying on its side," the statement said.

"Eight persons were inside the bus while another nine were found outside the bus.

"The rear windscreen of the bus which had shattered served as an entry point for SCDF rescuers.

[Road Traffic Accident at No. 631 Bukit Batok Central] At about 5.05pm today, SCDF received a call for assistance at...

"The rescuers created an additional point of entry at the front of the bus by using an electrical saw to cut through the front windscreen.

"Once inside, rescue equipment were used to cut several poles off so as to create space for the casualties to be rescued safely.

"Two persons were carried off the bus on stretchers by SCDF rescuers.

"The remaining six persons were guided on foot out to safety."

The remaining three had minor injuries and refused to be taken to the hospital.

In response to a Stomp query, the police said investigations are ongoing.

According to The Straits Times, both buses were plying the feeder service route 945 and operated by Tower Transit.

A Tower Transit spokesman said three drivers and 15 commuters were involved in the accident.

All passengers were on the bus that flipped, while the other bus was not carrying any passengers.

An SBS Transit bus captain who was not driving was also injured and sent to the hospital.

As a result of the collision, the second bus smashed through a low fence and landed on its side, on a ramp that serves as an entry and exit point for other buses.

The spokesman added that the driver of the bus without passengers has been suspended pending the investigation. He was not injured.

Tower Transit apologised to the passengers involved in the accident and those inconvenienced by it. It is also reaching out to the injured passengers and providing assistance.