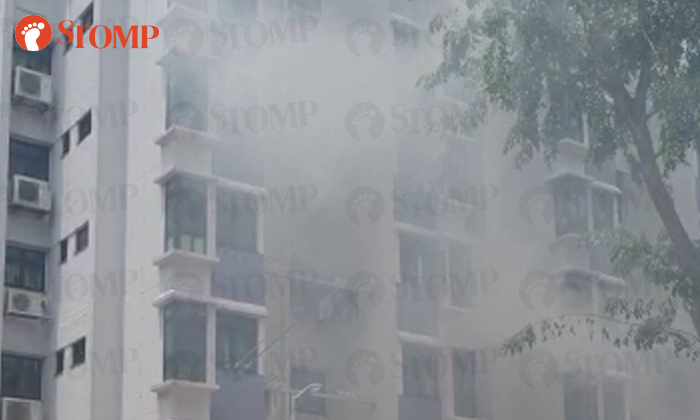 A fire broke out in a flat at Block 201 Bedok North Street 1 on Tuesday afternoon (Sep 6).

The Singapore Civil Defence Force (SCDF) told Stomp that it was alerted to the fire, which involved contents of a living room in a fourth-floor unit, at around 1.30pm.

Stomper Bob said he was on his way to the Toyogo wholesale outlet, located just a block behind, at around 2pm when he learnt of the incident.

He added: "SCDF and the police were at the scene. No one was panicking but the front door of the affcted unit was black from the smoke."

A video taken by Bob shows smoke billowing from the block and the area cordoned off by police.

The fire was extinguished by SCDF using a water jet.

About 14 people evacuated prior to the arrival of SCDF.

SCDF said: "Preliminary investigation into the cause of the fire indicates that it was due to an open flame left unattended in the living room.

"SCDF would like to remind the public not to leave lit materials unattended and that it should be extinguished before leaving your home."