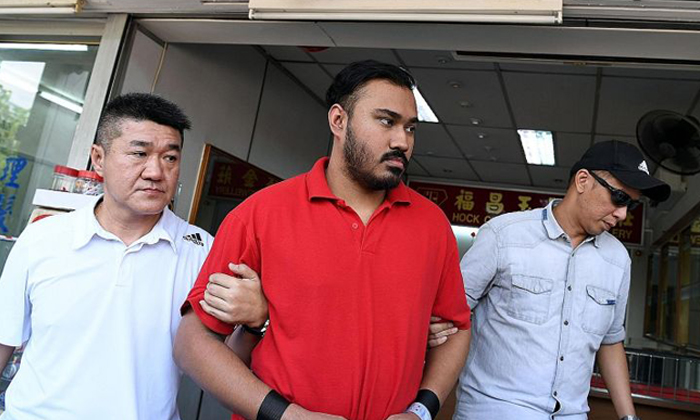 The mastermind of a brazen daylight robbery at an Ang Mo Kio jewellery store last year was jailed for three years and three months with six strokes of the cane on Thursday (Nov 12) after making off with nearly $120,000 worth of valuables.

M. Jegatheesh, 28, had conspired with two other men, Sharavindran Suppiah, 32, and Veeramani Subran Das, 37, the court heard. All three are Singaporean.

Sharavindran admitted to offences including dishonestly receiving the stolen property and will be sentenced on Friday.

Veeramani, who drove the getaway car, was sentenced to three years' jail with six strokes of the cane on Nov 2 after pleading guilty to his role in the heist.

Deputy Public Prosecutors Thiagesh Sukumaran and Jeremy Bin said that Jegatheesh met the two others in Geylang at around 9pm on Aug 13 last year to plan the jewellery store robbery.

The court heard that Jegatheesh targeted the shop, as it looked old, and assumed that it did not have an alarm system installed. He was also aware that the owners, Mr Ling Hew Kwong, 70, and his brother, Mr Leng Yew Weng, 75, "were of advanced age".

The following day on Aug 14, Veeramani met Jegatheesh in a car at a carpark near Block 521 Ang Mo Kio Avenue 5 at around 2.40pm.

Jegatheesh reached the store at around 4pm and tried to pull down the roller shutter at its entrance.

When it got stuck midway, he shouted at Mr Ling and his brother and jumped over a jewellery counter.

Amid the commotion, the two shop owners managed to press the hidden alarm buttons to alert an external security firm about the robbery.

The DPPs said that Jegatheesh then "swept the jewellery, including gold necklaces, bracelets, and pendants, into his duffle bag".

The two shop owners did not confront Jegatheesh, as he was bigger than them. Mr Ling, however, shouted for help, alerting two people nearby, and one of them called the police.

Jegatheesh dashed out of the store with his loot and got into a car driven by Veeramani.

The two men parted ways at an Ang Mo Kio carpark. Veeramani went on to meet Sharavindran later that day.

Police managed to arrest all three, and recovered the stolen valuables.

On Thursday, the prosecutors urged the court to sentence Jegatheesh to 3½ years' jail with six strokes of the cane, stressing that the robbery had caused "significant public alarm".

They added: "Jegatheesh was the chief planner in the operation. He roped in Veeramani and Sharavindran into the operation and meticulously planned this offence."