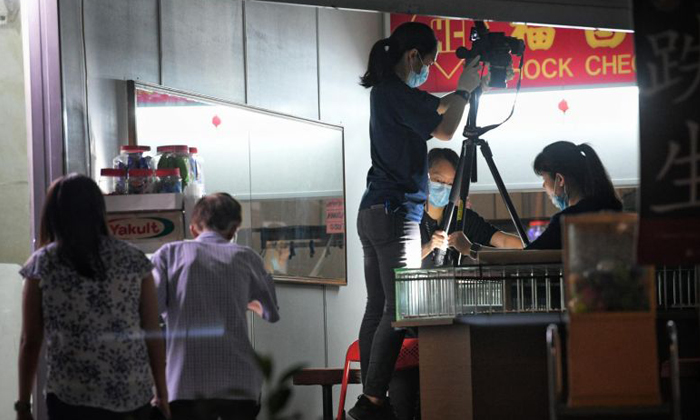 The third and final man linked to the robbery of an Ang Mo Kio jewellery store last year was sentenced on Friday (Nov 13) to 27 months' jail and a fine of $20,000.

He also admitted to seven other unrelated offences, including assault and driving a car on Aug 13 last year even though he did not have a licence to do so.

On Friday, he was disqualified from driving all classes of vehicles for six months. He will have to spend an additional two months behind bars if he is unable to settle the fine.

The mastermind of the robbery, M. Jegatheesh, 28, was sentenced on Thursday to three years and three months' jail, and six strokes of the cane.

Veeramani Subran Das, 37, who drove the getaway car, was sentenced to three years' jail and six strokes of the cane on Nov 2. All three men are Singaporeans.

Deputy Public Prosecutors Thiagesh Sukumaran and Jeremy Bin told the court that Jegatheesh met the two others in Geylang at around 9pm on Aug 13 last year to plan the heist.

The next day, Veeramani met Jegatheesh in a car at a carpark near Block 521 Ang Mo Kio Avenue 5 at around 2.40pm.

Jegatheesh went alone to Hock Cheong Jade and Jewellery shop, which is located at Block 574 Ang Mo Kio Avenue 10 and committed the robbery.

He filled a duffle bag with valuables worth nearly $120,000 in total and ran into a car driven by Veeramani. The two men then left the scene.

When they got to the same carpark in Ang Mo Kio, Veeramani took the duffle bag and they parted ways.

Later that day, Veeramani met Sharavindran who inspected the contents of the bag.

Sharavindran then contacted a man and asked him to arrange for someone to buy the jewellery.

The DPPs said: "Sharavindran was instructed by Jegatheesh to safekeep the jewellery in a place known by Jegatheesh while they figured out how to offload it.

"He directed Veeramani to drive to Dakota Crescent, where he knew there were abandoned blocks of Housing Board flats."

While Veeramani waited, Sharavindran carried a bag containing the valuables to the sixth storey of a block. He placed the bag into the cistern of a toilet bowl and the two men left the scene.

But all three offenders were arrested and the loot was recovered.

In an unrelated case, the court heard that Sharavindran had worked with three other men and a woman to receive stolen cheques in 2017.

He had also assaulted a 47-year-old man in Geylang in July 2017 following a dispute, an attack which left the victim with injuries including fractured ribs.

For each count of receiving stolen property, an offender can be jailed for up to five years and fined.