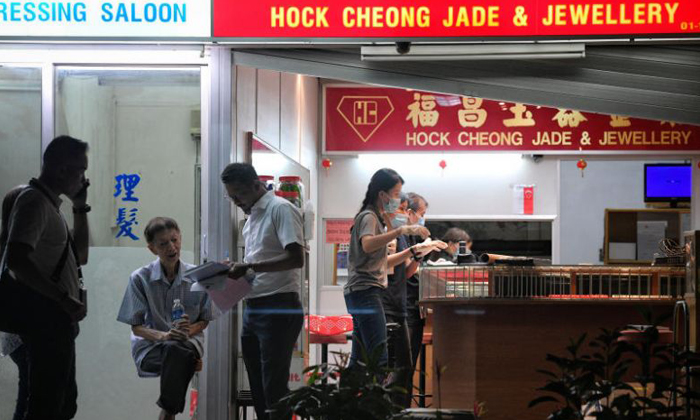 Three men decided to work together on a heist which was carried out last year at an Ang Mo Kio jewellery shop, a district court heard on Monday (Nov 2).

The offender who drove the getaway car, Veeramani Subran Das, 37, was sentenced to three years' jail with six strokes of the cane after pleading guilty to his role in what the prosecutors called a "brazen and audacious daylight robbery", with nearly $120,000 in valuables taken.

The cases involving his two alleged accomplices, M. Jegatheesh, 28, and Sharavindran Suppiah, 32, are still pending. All three men are Singaporeans.

Deputy Public Prosecutors Thiagesh Sukumaran and Jeremy Bin stated in court documents that Jegatheesh met the two others in Geylang at around 9pm on Aug 13 last year before telling them that he wanted to rob Hock Cheong Jade and Jewellery shop at Block 574, Ang Mo Kio Avenue 10 the next day.

The court heard that he chose the shop as it looked old and assumed that it was not installed with an alarm system.

The prosecutors added that Jegatheesh chose the shop as the owners, Mr Ling Hew Kwong, 70, and his brother, Mr Leng Yew Weng, 75, "were of advanced age and would not be able to put up resistance".

"Jegatheesh asked Veeramani to play the role of the getaway driver, and to ferry the gold to Sharavindran, and informed Veeramani that he would be paid for his role. Jegatheesh further asked Sharavindran to help with the sale of the gold. All three accused persons agreed to this plan."

Veeramani met Jegatheesh in a car at a carpark near Block 521, Ang Mo Kio Avenue 5 at around 2.40pm on Aug 14 last year.

The DPPs said that Jegatheesh then told Veeramani to drive to another nearby carpark five minutes after he got out of the vehicle.

Dressed in a long-sleeved blue shirt and an all-black ensemble including a hoodie, gloves, as well as helmet, Jegatheesh exited the car soon after.

The court heard that Jegatheesh reached the store at around 4pm and tried to pull down the roller shutter at its entrance.

When it became stuck midway, he shouted at Mr Ling and his brother before jumping over a jewellery counter.

Amid the ruckus, the two shop owners managed to press hidden alarm buttons to notify an external security firm that their store was being robbed.

The DPPs said that Jegatheesh then "swept the jewellery, including gold necklaces, bracelets, and pendants, into his duffle bag".

The two shop owners did not confront Jegatheesh as he was bigger than them, the court heard. Mr Ling, however, shouted for help, alerting two people nearby, and one of them alerted the police.

The court heard that Jegatheesh managed to flee the scene with nearly $120,000 worth of valuables and entered the getaway car driven by Veeramani. The two men then fled the scene.

Veeramani dropped Jegatheesh off before meeting Sharavindran later that day.

The DPPs said: "Sharavindran then decided to safekeep the jewellery in a place known by Jegatheesh while they figured out how to offload it. He directed Veeramani to drive to Dakota Crescent, where he knew there were abandoned blocks of HDB flats."

They added that Sharavindran then entered a unit and hid a bag containing their loot inside the cistern of a toilet bowl.

After an investigation, police raided Veeramani's home at 1.30am on Aug 16 last year. Officers have since managed to recover the stolen valuables.