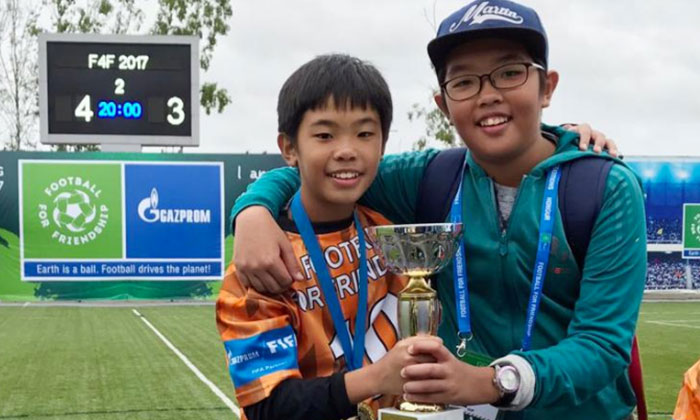 The boy and his twin brother flew to Saint Petersburg, Russia, where the competition was held, on Jun 26, 2017, reports Shin Min Daily News via Lianhe Zaobao.

A spokesman for Football for Friendship (F4F) said that the boy was chosen from a pool of more than 100 participants to represent Singapore.

The boy had aced interview sessions and trials to prove himself the most eligible candidate.

After three days of training, eight teams consisting of representatives from 64 countries competed against one another, with the boy’s team ultimately emerging the champion.

“I’m very proud being a Singaporean.

“To have the honour of letting the Singapore flag fly on a global stage like this, I feel very privileged.”

The boy’s mother told reporters that she was very excited when her son was chosen to be Singapore’s representative, but as a mother, she worried about her son’s first overseas trip to a distant country.

She said that her son fell in love with soccer when he was nine.

“Both the twins are avid soccer fans.

“Their younger brothers are also twins.

“The lot of them play together quite often.”