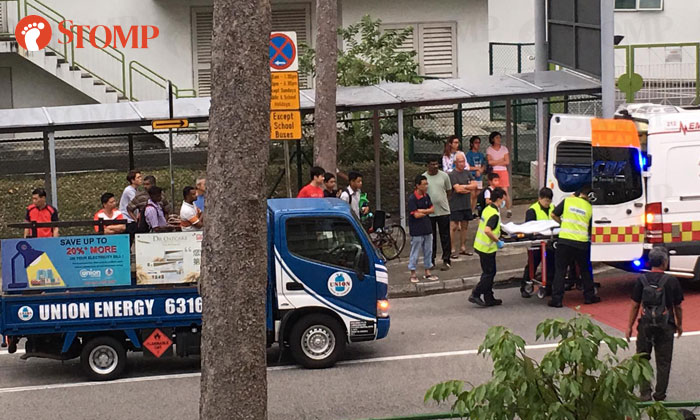 A 12-year-old girl was taken to hospital after she was hit by a lorry outside Maha Bodhi School at Ubi Avenue 1 on Monday evening (Jan 28).

Stomper Charlotte alerted Stomp to the incident and shared photos she took at the scene.

In the photos, the girl is seen being wheeled inside the ambulance.

A blue lorry is parked behind the ambulance.

It is unclear at publishing time whether the girl was a student of the school.

"This is an accident-prone area ever since traffic was shifted from down the road to be concentrated at this area," said Charlotte.

In response to a Stomp media query, the police said they were alerted to an accident involving a lorry and a pedestrian along Ubi Avenue 1 towards Ubi Avenue 2 at about 6.28pm.

The pedestrian, a 12-year-old girl was conscious when taken to KK Women's and Children's Hospital, a police spokesman said.