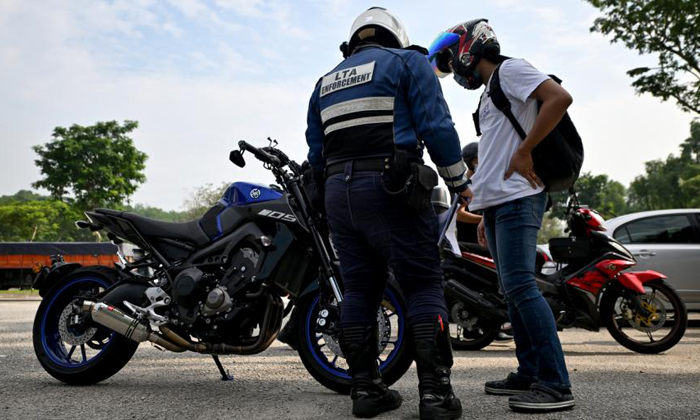 A dozen motorists were caught in a joint enforcement blitz targeting foreign-registered vehicles near Woodlands Checkpoint on Tuesday morning (April 12).

The blitz, which involved the National Environment Agency (NEA), Singapore Police Force (SPF) and the Land Transport Authority (LTA), was carried out to remind motorists to adhere to environmental and road safety regulations.

In a joint release, NEA, SPF and LTA said they will continue to conduct regular enforcement and ad hoc enforcement against errant motorists.

"Foreign-registered vehicles entering Singapore must comply with stipulated safety and emission requirements, such as Singapore's exhaust and noise emission standards under the Environmental Protection and Management (Vehicular Emissions) Regulations," they said.

"The licence plates on these vehicles must also be properly displayed."

Of the 12 caught on Tuesday, eight were for failing to comply with technical and regulatory requirements, such as having improper licence plates, three were for excessive noise emissions and one was for smoke emissions.

NEA has stepped up emissions testing of foreign-registered motorcycles at the checkpoints since April 1, when the land borders between Singapore and Malaysia were reopened.

During the blitz, a 23-year-old Malaysian who was stopped for the checks said he was shocked when he was told that his motorcycle was non-compliant.

Speaking to the media, he said he works as a workshop mechanic in Singapore, but was previously unaware that he had flouted regulations.

"My bike is compliant in Malaysia, but (the Singapore authorities) just told me it's not up to the standards here," he said.

The authorities took photos of his licence plate, and also used a device to measure the sound of the exhaust as they revved the motorcycle during testing.

The man added that he had been living in Singapore after the borders were closed, and had been riding around Singapore on the motorcycle for the past two years, but was never stopped.

"I started shuttling between Malaysia and Singapore after the border reopened, and was shocked when they stopped me," he said.

"I guess it's just my luck today."

The Traffic Police said it will not hesitate to take firm action against errant motorists who choose to flout traffic rules and regulations.

Foreign-registered vehicles found to be non-compliant may be denied entry into Singapore at the land checkpoints and face penalties issued by the relevant authorities.

Members of the public who wish to report errant motorists for offences may do so by submitting details such as the vehicle registration number, location, date and time of the incident on the websites of the relevant authorities.

NEA, SPF and LTA urged foreign motorists entering Singapore with their vehicles to play their part in keeping the environment clean and safe.

"Reducing vehicle exhaust and noise emissions will help to achieve and sustain a clean and healthy living environment in Singapore," they said.

All 12 motorists caught on Tuesday were issued composition fines.

NEA said that owners of smoky or noisy vehicles will be issued a tiered composition sum based on vehicle type and the number of past similar offences committed.

It declined to disclose the amount of the fines that were issued.

Those convicted of operating a vehicle which produces excessive noise emissions or emits smoke exceeding regulations may be fined up to $2,000 if it is their first offence, and up to $5,000 if they are a repeat offender.

Those convicted of failing to display proper licence plates may be jailed for up to three months and fined $1,000.