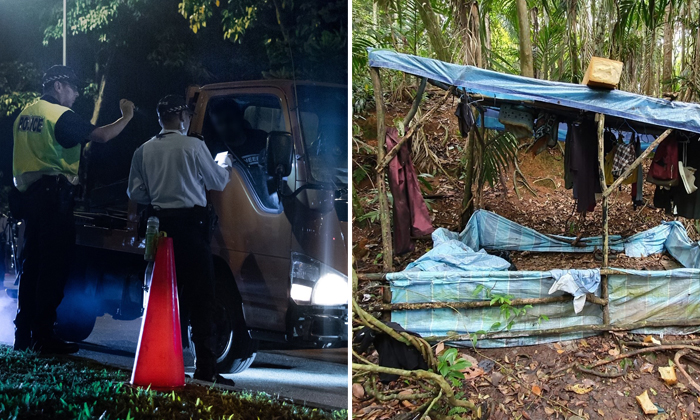 A total of 1,511 people were checked by the police during a multi-agency operation from Oct 29 to Nov 13, with 67 men and 51 women being hauled up for various offences.

During the operation, 34 men and 15 women, aged between 15 and 64, were arrested for various offences such as loansharking activities, suspected drug-related offences, drink driving and other criminal offences.

Another six men, aged between 24 and 57, are under investigation for assisting in loansharking activities, loan scam and other offences.

In one of the operation with ICA, NParks and Singapore Customs, nine men, aged between 17 and 35, were arrested for various offences under the Immigration and Customs Act.

Seven cartons and 42 sticks of assorted brands of duty-unpaid cigarettes were also seized. The total excise duty and Goods and Services Tax (GST) evaded amounted to about $626.83 and $45.91 respectively.

A 34-year-old man was also nabbed for peddling duty-unpaid cigarettes after the police used a drone to complement ground operations.

Fifteen cartons of duty-unpaid cigarettes were seized, with the total excise duty and GST evaded amounting to around $1,281 and $93.89 respectively.

Meanwhile, 22 women, aged between 28 and 47, were also arrested for suspected involvement in vice-related activities.

They had allegedly advertised their sexual services online and carried out vice activities in the residential units.

Additionally, 17 men and 14 women were investigated for e-commerce scams and commercial crime-related offences.

Preliminary investigations revealed that they were believed to be involved in 63 cases reported island-wide involving a sum of more than $40,000.

Assistant Commissioner of Police Devrajan Bala, Commander of Jurong Police Division, said: "This joint operation was part of the police’s on-going efforts to clamp down on criminal activities.

"The police will continue to work closely with other Home Team and law enforcement agencies to take tough enforcement action against those who take part in criminal activities."

The police also leverage technology such as drones to enhance their operational capabilities, said Mr Bala.

He added: "With the upcoming school holidays and festive season, Jurong Police Division will be enhancing our police presence on the ground with an aim to keep the community safe and secure.

"We urge the public to continue to stay vigilant and not to be easy targets for criminals.”