11 arrested by CNB: Drugs worth around $1.2 million seized, over $15k cash recovered 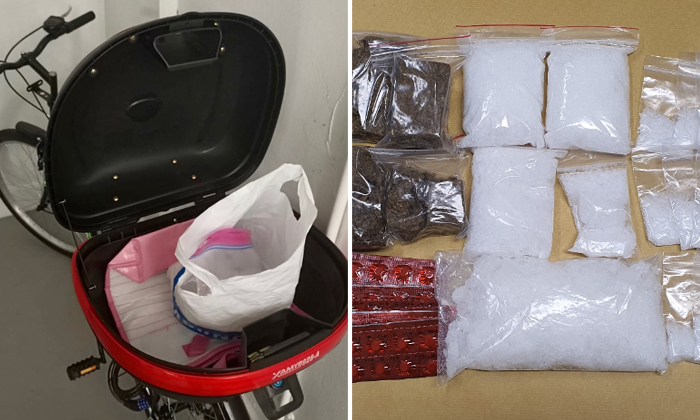 An estimated $1.2 million worth of drugs have been seized and 11 people, including four women, arrested in separate operations conducted by the Central Narcotics Bureau (CNB).

The CNB said in a statement on Friday (Oct 9) that five people were nabbed on Wednesday evening near Jalan Selamat near Kembangan.

Two of them - a 26-year-old Singaporean man and a female foreign national of the same age - were arrested first and officers recovered eight packets containing about 403g of Ice as well as 20 tablets of Ecstasy from a vehicle driven by the man.

An additional 146g of Ice and 300 Erimin-5 tablets were later recovered from the man's hideout in the vicinity.

Another three Singaporeans - two men aged 26 and 24, and a 24-year-old woman - were arrested in the same unit. Prior to the arrests, a package was believed to have been discarded from the unit's window, said the CNB. Officers later recovered the package that contained about 545g of Ice.

A search was conducted in the room where the three suspected drug offenders were arrested, and a total of about 298g of Ice, about 371g of cannabis and 31 Ecstasy tablets were seized, said the CNB.

The second 26-year-old man was also brought to a vehicle where another four packets containing about 20g of Ice were recovered.

In a follow-up operation on Thursday morning, CNB officers raided a residential unit in the vicinity of Lorong Limau in Whampoa and arrested a 47-year-old Singaporean man and a 20-year-old female foreign national.

Later that afternoon, a 54-year-old Singaporean man was arrested near Tampines Street 86. Eight Erimin-5 tablets were recovered from him.

CNB officers also raided a unit near Aljunied Crescent and arrested a 34-year-old Singaporean man and 28-year-old female foreign national. A total of 12 packets containing about 423g of Ice, about 45g of cannabis, 10 Ecstasy tablets and 64 Erimin-5 tablets were seized. About 1,060g of Ice and about 398g of ketamine were found in the carrier compartment of a man who was arrested near Aljunied Crescent. PHOTO: CENTRAL NARCOTICS BUREAU

About 1,060g of Ice and about 398g of ketamine were later found in the carrier compartment of a bicycle belonging to the 34-year-old man.

The 54-year-old and 34-year-old men are believed to be linked to the two arrested earlier in the vicinity of Lorong Limau, said the CNB.

On Thursday evening, CNB officers arrested a 28-year-old Singaporean man in a hotel room in the vicinity of Upper Weld Road.

The drugs recovered included a straw of heroin weighing approximately 0.3g, about 157g of Ice, about 265g of heroin, about 494g of cannabis, one Ecstasy tablet and one Erimin-5 tablet.

Cash amounting to $2,004 and various drug paraphernalia were also recovered from the hotel room.

The total amount of 3,651g of Ice seized is sufficient to feed the addiction of about 2,100 abusers for a week, the CNB said. Investigations are continuing.