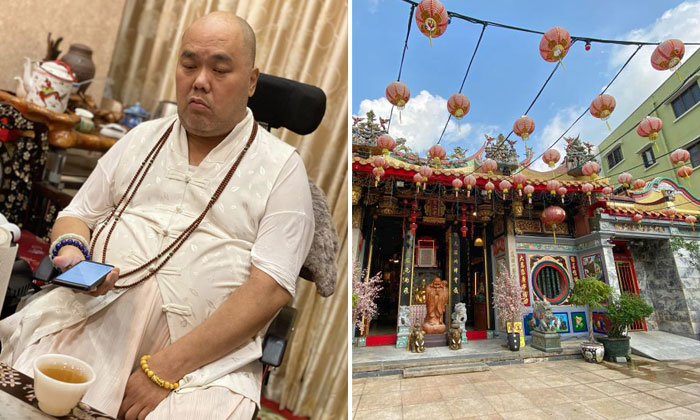 A century-old Buddhist temple in Race Course Road on Friday (Nov 15) denied allegations that its abbot had been having sex with multiple men on its premises.

The 102-year-old Leong San See temple has lodged a police report against a Facebook user who on Thursday posted photos and descriptions allegedly of the Venerable Tuan Boon engaging in sex acts with men.

The Facebook user, whose page uses the temple's name in Chinese, said that he was a temple devotee and that he wanted to expose the truth to protect the religion.

Buddhist monks are generally expected to be celibate.

When The Straits Times visited the temple on Friday afternoon, Ven Tuan Boon was not present, and a caretaker, who did not wish to be named, said that the abbot was recuperating from a stroke.

The caretaker, who is in her 70s, denied the Facebook allegations.

"Everything on that Facebook page is false rumours. The (Facebook) profile is not operated by the temple. We have no idea who is behind it," she said in Mandarin.

She and other temple staff said that the police visited the temple yesterday.

"The case is with the police now, so we will not be commenting further," the caretaker added.

The Straits Times understands that the abbot is suffering from a number of medical conditions, including diabetes and heart disease, and was admitted to Farrer Park Hospital earlier this week.

He is currently hospitalised following surgery.

Another devotee, who wished to be known only as Mr Lee, told the media earlier this month about his concerns over the abbot's behaviour.

He said he has reported the matter to the police and the Commissioner of Charities.

When contacted, the police confirmed that a report has been lodged but said that after consultation with the Attorney-General's Chambers, they would not be taking further action.

"Where the conduct in question is between two consenting adults in a private place, the position generally is that prosecution will not be in the public interest," police said on Sunday.

Earlier, on Nov 7, the Commissioner of Charities said that it was looking into the matter.

When The Straits Times visited the temple on Nov 7, an employee said the abbot was very ill and would not speak to the media.

Ven Tuan Boon told Chinese-language daily Lianhe Wanbao that day: "I am a person who has had a stroke, why are you coming to ask me these questions?"

He told the paper that he had nothing to apologise for.

Related Stories
Man had unprotected sex with 15-year-old stepddaughter in carpark, spotted by police officer
Man posed as female on Facebook to meet girls, introduced "escort" job and had sex with them as a client
Maid jailed after falsely accusing employer of raping her
More About:
temple
sex
fake news
controversy