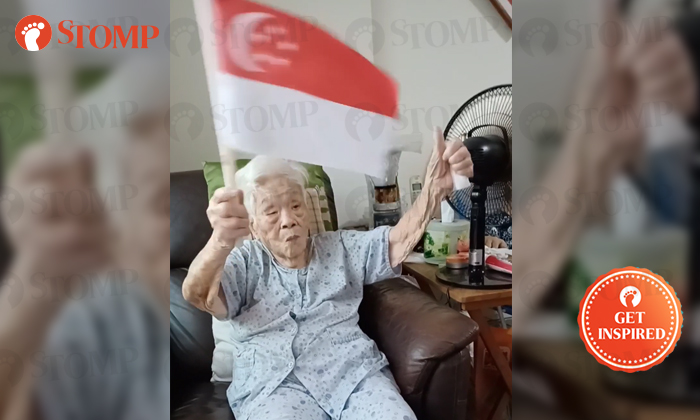 How did you celebrate Singapore's 57th birthday on August 9?

For Stomper Audrey's 102-year-old grandmother, she watched the National Day Parade (NDP) from the comforts of her home — despite not being a fan of television.

Audrey submitted a video of her maternal grandma waving the Singapore flag while watching the NDP on TV and shared how it is a family tradition.

She told Stomp: "It's a yearly tradition for my family to watch the NDP. We normally have an early dinner and stay in front of the television to watch it.

"My grandma is not keen to watch TV most of the time but she willingly joined us in watching the NDP this year. She has watched it live before but I believe that was more than 30 years ago."

According to Audrey, her grandmother has 13 children, 36 grandchildren and 26 great-grandchildren.

The Stomper added: "She has dementia but is still able handle certain things herself, such as eating on her own or walk with the help of a walker.

"I always try my best to get tickets to watch the NDP and got to see the preview on July 30 this year. As a Singaporean, I'm proud to stay in Singapore on August 9 and make it a must to wear a red t-shirt on Singapore's birthday."