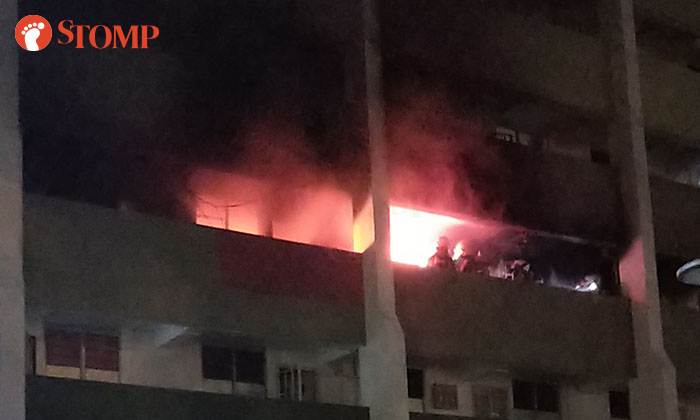 100 residents were evacuated from their houses and six were taken to a hospital after a fire broke out in a Housing Board (HDB) flat in Boon Lay on Monday night (July 15).

Stompers Candy, Faizal, Rohaizat and Jari alerted Stomp to the fire with photos and videos of the incident.

Bright, orange flames can be seen from a unit as people look on and film the incident with their mobile phones from ground level.

From the video, several Singapore Civil Defence Force (SCDF) and police vehicles can also be seen at the scene.

Faizal told Stomp that he was making his way home when he passed by the block at about 10.45pm.

He said: "The firefighters were already there when I walked by. They were still putting out the fire and I even saw them trying to break into some flats. I couldn't go near the block because of police tape."

In response to Stomp queries, a SCDF spokesman said: "SCDF responded to a fire incident at Blk 191 Boon Lay Drive at about 10.15pm on Monday (July 15).

"The fire, which involved contents of a unit on the fourth floor, was extinguished by the SCDF using one water jet.

"About 100 people from the affected block were evacuated with the assistance of SCDF and Singapore Police Force.