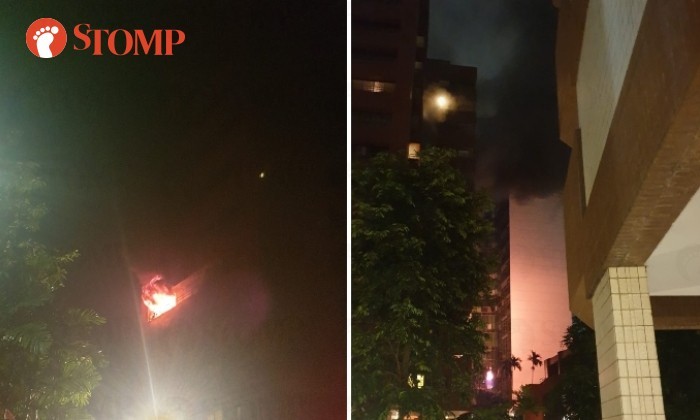 About 100 residents were evacuated after a fire broke out in a bedroom of a unit at Block 6 Cairnhill Rise on Sunday (Dec 13) at 4.40am.

Stomper Anonymous, who resides in the area, shared photos and videos of the incident which show flames coming out of a window.

In the video, Singapore Civil Defence Force (SCDF) officers can be seen at the scene as flames engulf the window area and black smoke billows into the sky.

"I'm not sure how this happened but I think it could be because a portable charger was left to charge overnight," Anonymous said.

"I hope no one got injured and everyone is okay."

SCDF put up a statement on Facebook regarding the fire at 11.52am on the same day.

According to the post, the fire involved the contents of a bedroom in a unit on the sixth floor.

"Upon arrival, SCDF firefighters wearing breathing apparatus sets proceeded to the affected unit where the fire was raging in the bedroom," said SCDF.

SCDF added that the fire was extinguished using one water jet.

About 100 residents from the affected block, including the neighbouring block, were evacuated by the police as a precautionary measure.

SCDF also said that an occupant from the affected unit suffered a fall during self-evacuation and was conveyed to Tan Tock Seng Hospital.