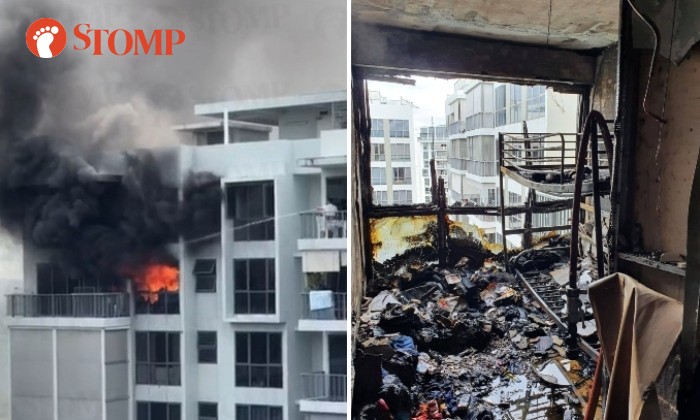 Six people were rescued and 100 residents were evacuated after a fire broke out in a unit at Block 19 Punggol Field Walk on Saturday (Dec 19).

Of the six people that were evacuated, five of them were taken to Singapore General Hospital.

Stomper Mike, Ben, Ong and Yoges shared photos and videos that show the unit being engulfed in flames and black smoke surrounding the affected block.

In the video, a resident in the unit adjacent to the fire can be seen using a hose in an attempt to douse the fire.

Residents can also be seen gathering around the pool at the foot of the block as policemen cordon off the area using police tape.

The Singapore Civil Defence Force (SCDF) said in a post on Facebook that they were alerted to the fire at 11.25am.

According to the post, the fire involved the contents of a bedroom in a two-story unit on the 16th floor.

"Upon arrival, SCDF firefighters wearing breathing apparatus sets had to conduct forced entry into the smoke-logged unit. The fire was raging and had fully engulfed the bedroom," SCDF wrote.

"Firefighters from Sengkang Fire Station extinguished the fire using one water jet and rescued six occupants from the affected unit."

SCDF added that one person was found in the kitchen while two people were rescued from a bedroom on the upper floor of the unit, directly above the bedroom on fire.

Three others were rescued from the ledge outside the toilet on the upper floor and were quickly brought in to safety through the toilet window.

"Five of the six occupants were taken to Singapore General Hospital for smoke inhalation with one person refusing conveyance to the hospital," said SCDF.

"Patients who suffered smoke inhalation or serious burn injuries but are in stable condition, will be conveyed to Singapore General Hospital's specialised Burn Centre instead of the nearest hospital."

About 100 residents from the affected block were also evacuated by the security officers as a precautionary measure.