10 suffer burn injuries in Tuas fire: Workers had skin peeling from their faces, ran out screaming 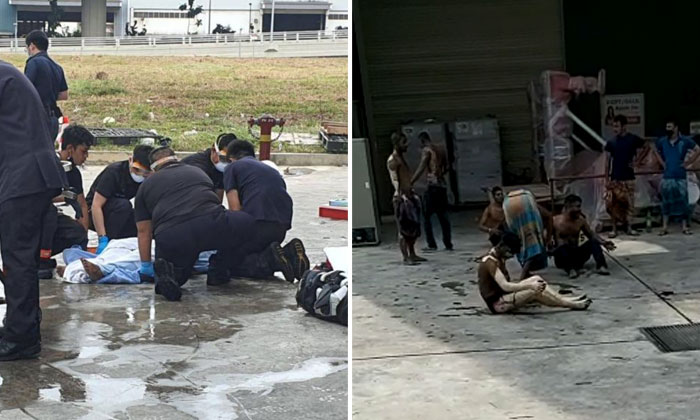 Mr Islam Ruhul was working when he heard the sound of an explosion from a nearby workshop.

He immediately rushed to the back entrance of the unit and saw a disoriented and badly burnt man.

The 35-year-old migrant worker said that he moved the man away from the scene and used a penknife to cut away the remains of the injured man's clothes, which had caught fire.

This was in the aftermath of a fire at an industrial building in Tuas on Wednesday morning (Feb 24) that saw 10 people taken to hospital for burn injuries.

CIrculated videos of the incident shared by Stompers.

The Singapore Civil Defence Force (SCDF) said it responded to the fire at 32E Tuas Avenue 11 at about 11.25am on Wednesday.

The occupier of the unit is Stars Engrg, which deals with fire protection systems, according to the Ministry of Manpower (MOM).

Mr Islam, who works for construction company Swees-Tech Engineering, said the explosion occurred at around 11am.

Swees-Tech Engineering's owner, Mr John Tan, was in his office in the building when the fire broke out.

He and his workers rushed towards the scene and started evacuating the victims.

"Some of them ran out screaming, but they lost their (sense of) direction," Mr Tan said.

He added that there was smoke coming out from the unit, and flames inside. There were also burning pieces of cardboard that had been blown out of the building, he said.

Three other migrant workers - Mr Miah Md Likhon, 24; Mr Hossin Shakil, 24; and Mr Hridoy Md Reyaz Uddin, 22 - rushed from their dormitory in the next building to help the victims.

Mr Hridoy said the building's fire alarm and sprinklers were activated after the explosion occurred, and SCDF vehicles arrived about five minutes later.

Mr Sardar Nazmul, 32, was in his dormitory at the unit next door when the incident occurred.

He spotted the victims after coming out to investigate.

Some of them had skin peeling from their faces, while others were bleeding from the soles of their feet, he said.

Mr Wong Wee Chiang, 45, who owns mechanical engineering company P3 Project, said he evacuated with his staff from the area after hearing the explosion. His firm occupies the unit opposite Stars Engrg.

Mr Wong said he later discovered that two of his workers had suffered minor injuries in the blast.

He said one worker had burns on his hands and buttocks, while the other had been knocked to the ground by the blast.

He took both of them to Ng Teng Fong General Hospital before SCDF officers arrived.

Regarding the fire that broke out at an industrial building at Tuas Avenue 11 earlier Wednesday morning, the Migrant...