10, including police officer, taken to hospital after fire engulfs bedrooms on 3 floors of Yishun block 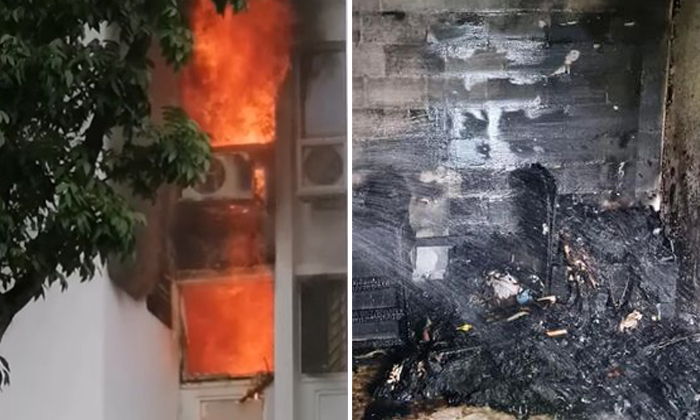 Ten people suffered smoke inhalation in a fire that broke out at Block 141 Yishun Ring Road on Tuesday morning (June 29).

The Singapore Civil Defence Force (SCDF) was alerted to the blaze at around 8.30am, it said in a Facebook post.

Upon SCDF’s arrival, thick smoke was seen emitting from units on the third, fourth and fifth floors of the block.

The fire, which involved the master bedrooms of units on the third, fourth and fifth floors, was extinguished with three water jets.

SCDF added: "The fire was confined within the master bedrooms, with smoke damage sustained throughout the three units.

"At the height of the firefighting operation, an additional water jet was used from the exterior of the block to suppress the fire which was leaping out from the bedroom windows."

In a video posted online, flames can be seen engulfing units on multiple floors of the block.

Stomper Anonymous, who shared videos showing smoke billowing from the block, said: "I heard someone shouting for help in Mandarin."

Around 100 residents from the second to tenth floors of the affected block self-evacuated before SCDF's arrival.

A total of 10 people, including a police officer, were taken to Singapore General Hospital for smoke inhalation.

Five off-duty SCDF personnel, who were in the vicinity, had also rendered assistance with medical and firefighting operations.