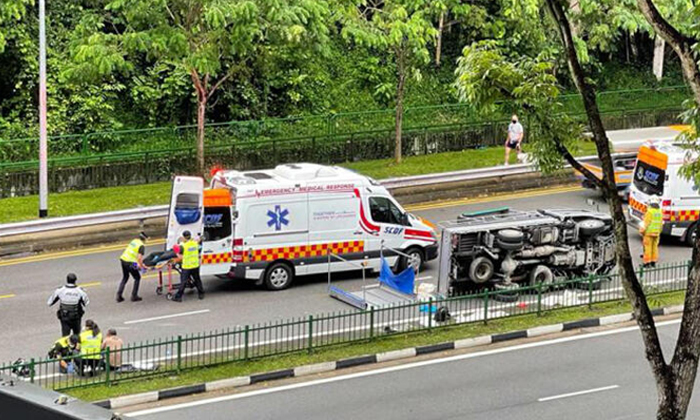 Ten men were taken to hospital after an accident involving a lorry along Upper Bukit Timah Road on Saturday morning (April 24).

The police told Stomp that they were alerted to the accident, which occurred 200m away from The Rail Mall and towards Bukit Timah Road, at 7.19am.

A spokesman said: "The 35-year-old male lorry driver and nine male lorry passengers, aged between 26 and 50, were conscious when conveyed to hospital."

According to Lianhe Zaobao, the driver had lost control of the lorry.

He and passengers who had been seated at the back of the lorry were seen climbing out of the overturned vehicle on their own. They then sat on the road divider while waiting for medical assistance.

They are understood to be foreign workers.

A resident in the vicinity said that there was a loud noise when the lorry overturned. She soon saw several ambulances arriving at the scene.

In response to queries from The Straits Times, a spokesman for Humanitarian Organisation for Migration Economics (Home) said: "It is common sense that travelling in the back of a cargo lorry exposes passengers to greater risk of more severe injury in motor accidents.

"Given that strict road safety rules apply to all other road users, the fact that migrant workers are transported like cargo is inhumane and shameful."

Home, a charity dedicated to empowering and supporting migrant workers, has pressed the issue for years with both the Manpower Ministry and the public, added the spokesman.