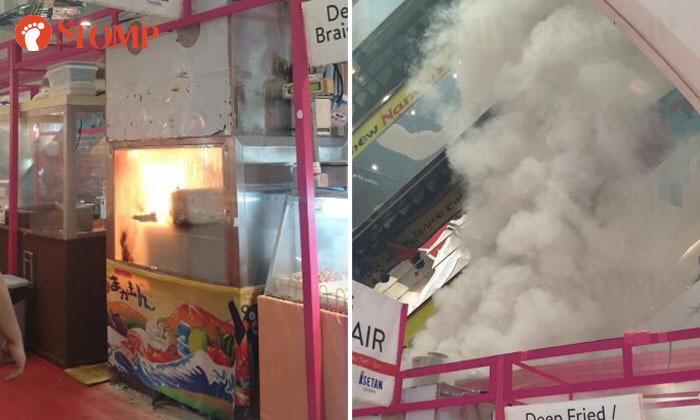 One person was taken to hospital for smoke inhalation after a fire broke out at Tampines Mall on Thursday afternoon (Apr 18).

It was extinguished by members of the public using five powder extinguishers and a hose reel, the Singapore Civil Defence Force (SCDF) said in response to a Stomp media query.

Several Stompers alerted Stomp to the fire that started at a fryer in a stall at the mall's atrium fair.

"I saw people use fire extinguishers but the fire kept getting bigger and bigger," he said.

"I saw them pull out a fire hose before I was dragged out by my friend because I was choking on the smoke."

Edmund described the scene as "chaotic".

"Everyone was running around and nobody knew where to go," he said.

"At about 4.30pm today (18 April 2019), a small fire broke out in the atrium of Tampines Mall and the fire alarm was activated.

"The fire was quickly put out. As a safety precaution, the centre management office evacuated all the shoppers and tenants in the mall.

"Tenants started to re-enter the mall at about 5.55pm and the mall reopened to the public at about 6.45pm.

"The safety and security of our shoppers and tenants is of paramount importance.

"We are giving our full cooperation to the authorities on their investigations into the cause of the fire."

The SCDF said it responded to the fire at 4.35pm.

"The fire, which involved a fryer at the atrium fair, was extinguished by members of the public using 5 dry powder extinguishers and a hose reel before the arrival of SCDF," a spokesman said.

"A man was conveyed to Changi General Hospital (CGH) for smoke inhalation by an SCDF ambulance.

"The mall was evacuated by security personnel as a precautionary measure."