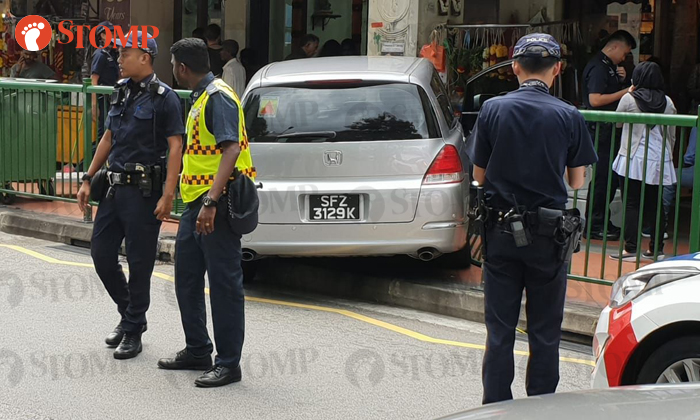 A car crashed through a railing, mounted the kerb and rammed into a shophouse in Little India earlier today afternoon (April 17).

The incident occurred along 10 Buffalo Road, near Tekka Centre, at around 2pm.

In response to a Stomp query, the police told Stomp that they were alerted to the accident involving a pedestrian and a car at 2.05pm.

The pedestrian, 31-year-old man, was conscious when taken to Raffles Hospital.

The Singapore Civil Defence Force (SCDF) told Stomp that it responded to the accident at 2.20pm and conveyed the victim to hospital via an ambulance.

Stomper Sha said his auntie was in the area and took photos of the collision, which he shared with Stomp.

He said: "The car crashed into the shop but we're not sure how the accident happened."

Stomper Ah Boy also contributed photos and videos of the accident scene that he said has been circulating online.