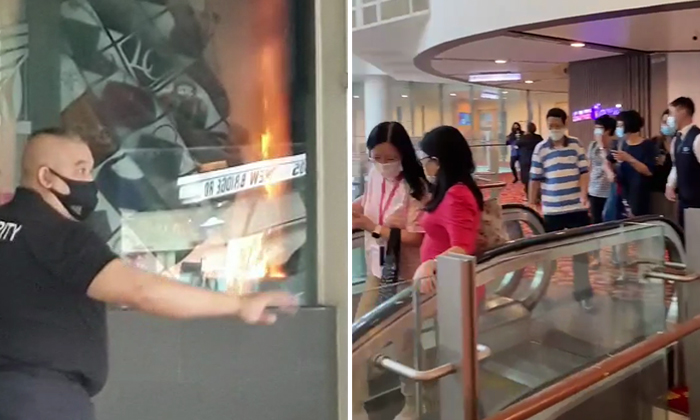 One person was taken to hospital after suffering smoke inhalation in a fire that broke out at Chinatown Point shopping mall on Friday morning (March 12).

The Singapore Civil Defence Force told Stomp that it was alerted to a fire at 133 New Bridge Road at around 10.25am.

The fire involved a signboard in a store on the first floor and was extinguished by the sprinkler system prior to SCDF's arrival.

About 100 patrons and store operators self-evacuated the premises.

Stomper Freddie shared a video showing a security officer keeping passers-by away from the fire.

According to The Straits Times, the blaze is believed to have started inside Luxury City, a retailer of luxury bags and accessories located on the first floor of the mall.

"Preliminary investigation into the cause of the fire indicates that it was of electrical origin," SCDF added.

Responding to a Stomp query, a spokesman for Perennial (Singapore) Retail Management Pte Ltd, manager of Chinatown Point, said: "A fire broke out at a luxury bag store located on Level 1 of Chinatown Point retail mall at 10.15 am today and the property’s fire alarm sounded.

"As the fire broke out before the tenant’s operating hours, our property operations team, which was the first responders on-site, entered the tenant’s unit to try to extinguish the fire before the SCFD arrived.

"Subsequently, with the help of the SCDF, the fire was successfully put out at 10.45am.

"There were no casualties except for one of our property operations staff who suffered mild smoke inhalation and was conveyed to the hospital by ambulance. He has since been discharged and is well.

"We are working closely with the authorities to investigate the incident.

"Upon safety clearance by the relevant authorities, the mall has resumed operations. The safety and well-being of our shoppers, tenants and staff are our priorities and we sincerely apologise for any inconvenience caused."

According to Freddie, traffic in the area, such as at Cross Street, was "quite rabak" due to the fire and emergency vehicles at the scene.