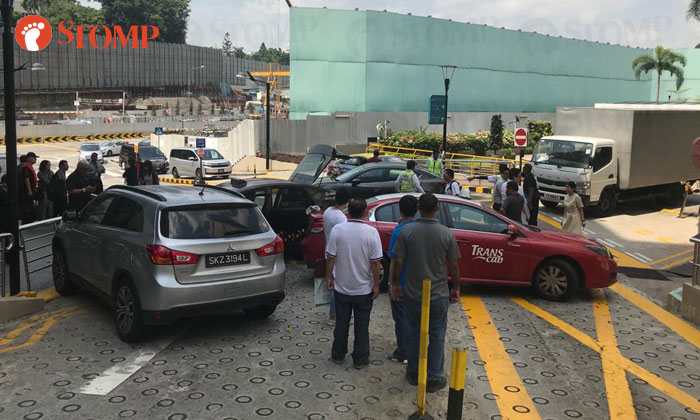 The deceased and another man, 42, were passengers in one of the taxis and received medical assistance from the Gleneagles Hospital's staff following the accident.

The taxi driver of the other cab, a 62-year-old man was taken to National University Hospital (NUH).

Stompers Sarah and Ivan alerted Stomp to the incident and shared photos of it that had been circulating on WhatsApp.

In the photos, the four vehicles are seen blocking the service road to the hospital's entrance.

In response to Stomp's media queries, the police said they were alerted to the accident at about 11.21am.

The Singapore Civil Defence Force (SCDF) told Stomp they responded to the scene at 11.25am.

"One of the taxi drivers, a 62-year-old man was stabilised by medical staff from Gleneagles Hospital before he was conveyed conscious to NUH," a police spokesman said.

"Two passengers from another taxi, a 70-year-old man and a 42-year-old man received medical attention at Gleneagles Hospital.

"The 70-year-old man subsequently passed away."

Related Stories
Toyota driver beats red light -- but will probably never do it again after suffering this impact
2 riders collide along Sims Avenue: 'Could have been disastrous for elderly couple who jaywalked'
2 taken to hospital after collision involving SBS Transit bus and school bus at Bedok Rd
More About:
Accidents
taxi
car crash
hospital