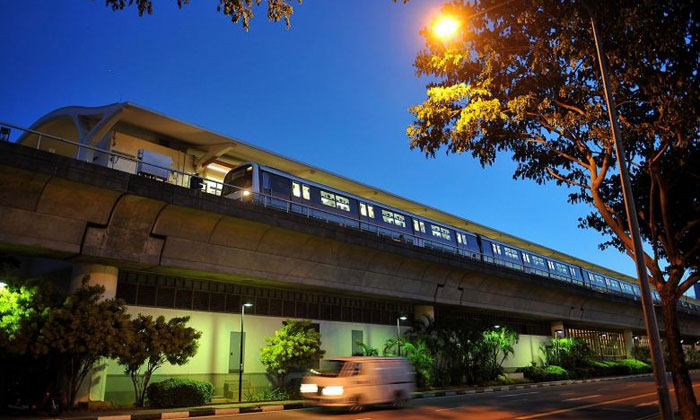 A train captain was sent to Changi General Hospital (CGH) after lightning reportedly struck an MRT train on the East-West Line after 4pm today (Nov 20).

"SCDF was alerted at 4.20pm and dispatched one ambulance to Tanah Merah MRT Station.

"One male Malay was conveyed to CGH.

"He was in a conscious and alert state."

The Straits Times reported on the lightning strike at 5.30pm today and said that the incident resulted in journey times between Tanah Merah and Paya Lebar stations to be delayed for at least 10 minutes.

The newspaper understands that the affected train has been withdrawn from service.

Here is SMRT's statement in full:

"A westbound train heading towards the city stalled as it was approaching Bedok MRT station. Passengers were detrained at Bedok station, and the train was withdrawn from service for investigation. After the incident, the Train Captain, who said he was unwell, is receiving medical attention.

"In response to media queries, we are currently investigating this incident as a possible lightning strike.

In a previous incident on May 11, 2016, a train on the North-South Line was crippled by lightning, disrupting southbound services between Yishun and Yio Chu Kang stations.

Trains on surface lines are occasionally struck by lightning but SMRT has said that occupants are protected and unlikely to be injured in such an event.

A video that went viral in August earlier this year shows what happens when lightning strikes a train on Tokyo's Odakyu Electric Railway. Thankfully, no one was hurt in the incident.

Related Stories
Anvil thunderstorm at Woodlands shows how nature is a force to be reckoned with
Stevens Rd looks like 'warzone' after wall gets damaged during flash floods
Couple killed by lightning while out jogging in Malaysia
More About:
injured
lightning
MRT
Tanah Merah