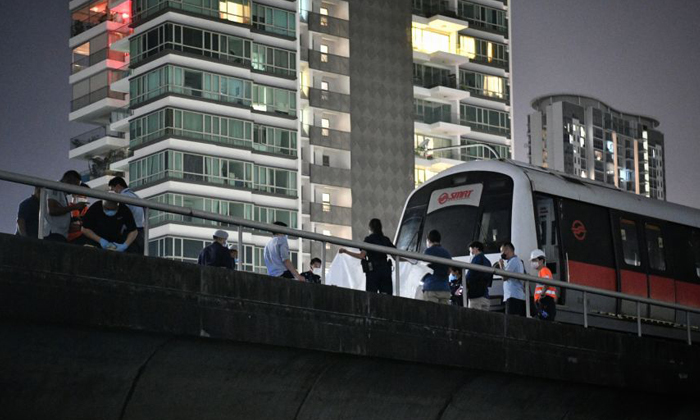 Service along the East-West MRT Line was disrupted on Thursday evening (Feb 25) after a person who entered a tunnel near Lavender station was killed.

Operator SMRT tweeted at 9.48pm that the disruption between Bugis and Aljunied was due to a "train incident".

The Straits Times understands a person had intruded into the eastbound tunnel from a portal area - where the train tracks enter the underground tunnel - at Lavender.

It is unclear how the person had accessed the tracks. ST understands high fences are in place to prevent unauthorised access through the portals.

In a statement posted on Facebook after 1am, SMRT said a man was run over by a train near Kallang MRT station on the East-West Line towards Pasir Ris.

A person was subsequently pronounced dead on the eastbound track near Kallang MRT station, it added.

The operator suspended train services along the four-station stretch between Bugis and Aljunied in both directions, closed Lavender and Kallang stations and activated free regular bus and free bus bridging services.

It said it is assisting in police investigations.

The Singapore Civil Defence Force said it received a call for help at about 9.35pm. An SCDF paramedic pronounced a person dead at the scene.

Freelance worker Bessie Tan, 59, said she was on a train from town at around 9.30pm when passengers were told to disembark at Bugis.

"Then the train left empty," she said. "We boarded the next train which carried passengers, but it didn't leave Bugis and we were all told to leave the train again."

She added that at first, the announcement at the station "mumbled something like an incident at Lavender".

This is the first MRT track fatality since two SMRT trainees were knocked down by a train in March 2016.

There was a more recent track death in March 2017 - but on the LRT system - when a drunken passenger was killed after going onto the tracks near Fajar station.

Mr Jordan Lim, a 20-year-old student, initially thought Thursday's incident was a regular train breakdown and wondered why the train lights were switched off.

"It didn't really make sense to me. Then I stopped and saw the flashlights in the front part of the carriage, so speculated that someone might have got knocked over."

Mr Sng Ler Jun, 24, was running near Kallang MRT station with a friend and the flashing lights of the SCDF vehicles caught his attention.

He then stationed himself directly below the tracks, where he heard officers shouting "trauma bag".

The freelance writer added: "There was not much of a crowd. I talked to another couple who would have gotten on this train but had to take the shuttle bus instead.

"This is my first time experiencing something like that."