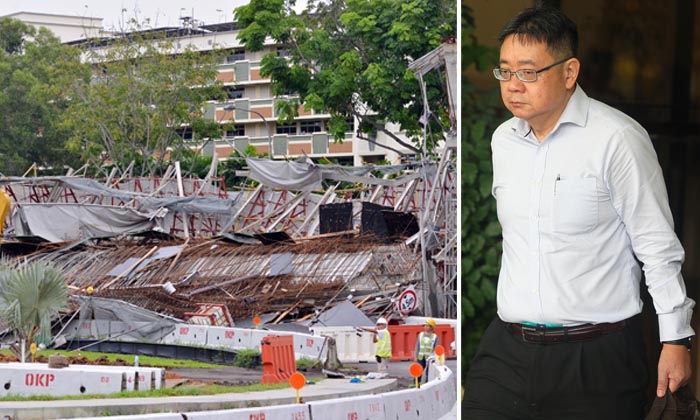 The engineer who did not check detailed plans and design calculations for a viaduct that collapsed in Changi was yesterday jailed six months.

A section of the 1.8km-long viaduct linking the Tampines Expressway and Pan-Island Expressway collapsed in the early hours of July 14, 2017, killing Chinese worker Chen Yinchuan, 31, and injuring 10 others.

Eight of the 10 permanent corbels that Leong Sow Hon, 61, was supposed to check would have failed, leading to unimaginable casualties, the prosecution told the court last month.

The collapse was due to temporary structures not under Leong's purview giving way.

But a collapse would have been inevitable due to Leong's lapse, Deputy Public Prosecutor Yang Ziliang told District Judge Hamidah Ibrahim.

DPP Yang said Leong, the accredited checker appointed by the Land Transport Authority, was personally responsible for double checking plans and calculations but was derelict in his duties.

Leong, the managing director of Calibre Consulting Singapore, pleaded guilty last month to an offence under the Building Control Act. Another charge of falsely certifying he had carried out the checks was taken into consideration.

Leong admitted he did not evaluate, analyse or review the structural design and failed to perform original calculations for the viaduct's permanent corbels, which are reinforced concrete structures that allow load on the viaduct's flyovers to be transferred to supporting columns.

Five were unable to support the weight they were designed for while three others would have had significant structural cracks with a full traffic load.

The prosecution sought a nine-month jail term while Leong's lawyer Tai Chean Ming sought a $25,000 fine, emphasising that Leong's failure did not do actual harm.

None of the cases involving accredited checkers in the last two or three decades led to prison terms, Mr Tai had said.

Leong intends to appeal and he was offered $15,000 bail yesterday. He is the first person involved in the 2017 collapse to plead guilty to an offence.

Cases involving the main contractor, Or Kim Peow Contractors, and four other men allegedly linked to the incident are still pending.

The viaduct was supposed to be completed by the first quarter of next year, but is now expected to be ready by the first half of 2022.