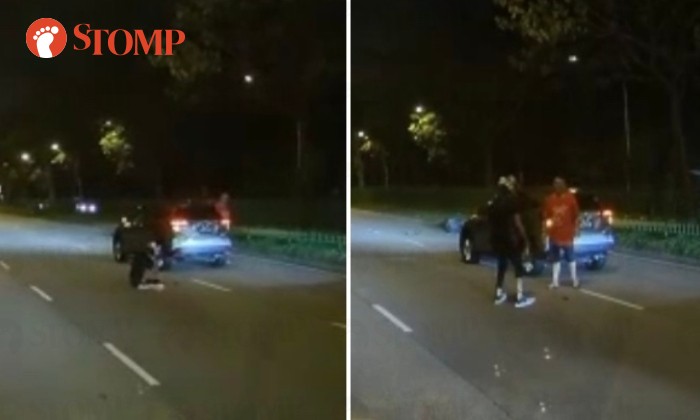 A person was injured after a motorcycle collided with a car along Bukit Batok Road on Thursday (Aug 6).

A Stomper alerted Stomp to the accident and shared video footage taken from his in-car camera.

The video shows the motorcyclist lying on the ground and the car driver subsequently helping him up.

"If you take a closer look at the video, you can see the motorcyclist was swerving when it hit the car," the Stomper said.

"We helped the motorcyclist and then we called the ambulance.

"When the ambulance arrived, the motorcyclist took off from the scene but we managed to find him at Block 340 Bukit Batok Avenue 9."

In response to a Stomp query, the Singapore Civil Defence Force (SCDF) said they were alerted to a road traffic accident along Bukit Batok Road at about 12.40am.

"SCDF assessed a person for minor injuries and the person subsequently refused conveyance to the hospital," said a spokesman for SCDF.