1 guy, 1 camera, 1 tripod: Stomper shares amazing video of him dancing in over 70 countries 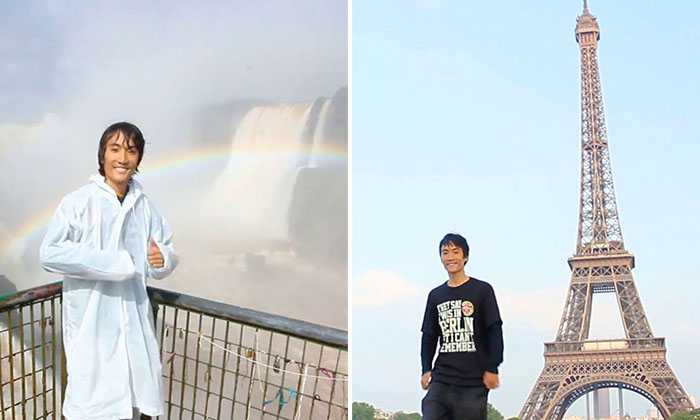 Instead of taking photos of his trips, a man decided to record himself "dancing" in over 70 countries.

Stomper Ee Thai said: "I realised that I was travelling quite a bit so I decided to take videos of myself to keep them as memories.

"I saw a commercial a few years ago and decided to do something similar.

"I brought a tripod and a DSLR camera to shoot different footage everywhere I went."

He also uploaded the video on YouTube where it has since garnered over 230 views.

When Stomp asked how long it took him to capture all the footage in the video, Ee Thai said: "The video was filmed over three to four years.

"I didn't count how many places I went to in the video but I travelled to over 70 countries and only cut out the best footage I had when I visited them."

In one of the shots Ee Thai was joined by vlogger Nas Daily.

"I went to one of his meet-ups and asked him to join me," said Ee Thai.

But that wasn't the only interesting person he met.

He told Stomp: "There were too many interesting people!

"I went to find a tribe of aboriginals in Taiwan known as the Zhenbing tribe.

"I found them by flying a drone and attracting them to me.  They then brought my friend and me to their houses and offered us their traditional costumes.

"We wore these costumes and danced in their rice fields.

"I wanted to use a DSLR camera instead of a GoPro to capture my dance when I was at Iguazu Falls in Argentina. I brought my tripod along and my equipment got so wet that right after I captured the clip, my camera broke and I had to get a new one.

"Another instance was when I was in Washinton, DC, and it was winter. It was so cold that my tripod broke because the metal had cracked.

"I also danced on hot ash after Pacaya Volcano in Guatemala erupted. My shoes melted.

"I didn't keep track of how much I spent on all the trips and I can't say which was my favourite place.

"They each have their own flavour, so I've learnt how to appreciate them uniquely."