1 dead and 4 injured in AYE crash: Merc driver who went against traffic had acute psychosis 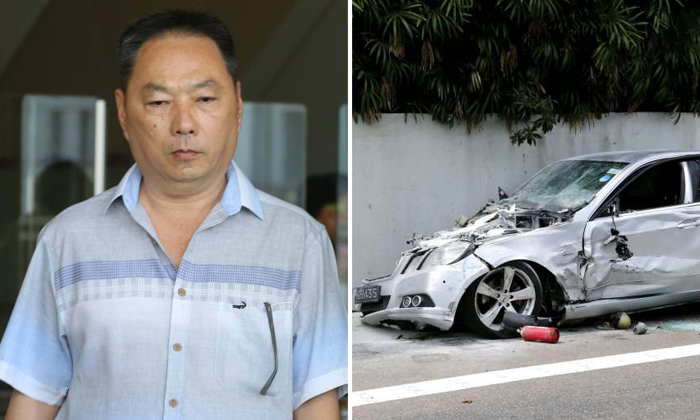 The driver of a Mercedes-Benz that barrelled down the Ayer Rajah Expressway (AYE) against the flow of traffic nearly three years ago, leaving one dead and four injured, was suffering from acute psychosis at the time, the High Court heard yesterday.

The mental condition "significantly impaired" the judgment of businessman Lim Chai Heng, 56, leading him to discount the risks of his actions, despite signs of danger and warnings from his son, who was in the car with him, stated an Institute of Mental Health (IMH) report.

Lim told an IMH psychiatrist that when he saw cars and motorcycles coming towards him, he "knew finished already" and that "if not others hit (him), (he) will hit others".

The underlying cause of the psychosis remains unclear.

Lim pleaded guilty yesterday to a charge of causing death by a rash act, which carries a maximum sentence of five years in jail and a fine.

Prosecutors sought at least two years in jail and a 12-year driving ban, while the defence asked for five to seven months in jail and an eight-year ban.

Another four charges - three for causing grievous hurt and one for causing hurt - will be considered when he is sentenced at a later date.

Lim was originally charged with causing death by dangerous driving. The charge was upgraded to culpable homicide before it was amended to the current charge.

The court heard that on the morning of Dec 19, 2016, Lim was driving his son from their Hougang home to drop him off at his new workplace in Depot Road.

Along the Central Expressway, when Lim drove past the Braddell Road exit, his son asked why he did not take the exit to avoid paying Electronic Road Pricing charges.

Lim replied: "Do not be afraid. I know the way."

But instead of getting out at the Jalan Bukit Merah exit, which was the closest to the destination, Lim continued driving into the AYE towards Tuas.

Ignoring his son's repeated requests to exit the AYE, Lim skipped another 14 exits and accused the younger man of not trusting him.

After travelling about 23km, Lim reached the Tuas Checkpoint and drove into the motorcycle lane. He then made a three-point turn and drove on as oncoming vehicles avoided him.

When he entered the AYE, he accelerated to a speed of 126kmh to 147kmh, speeding down the slope towards the Tuas West underpass.

Motorist Tan Han Boon, now 37, swerved, causing his Mazda 6 to collide with a bus before hitting a concrete wall.

Lim's car then collided with a Toyota Vios driven by artist Jackie Liong Kuo Hwa, 38, whose wife Venny Oliver, now 40, was in the front passenger seat. The impact sent the Toyota slamming against the wall.

Lim's car then crashed into a scooter, causing rider Teh Tze Yong and his wife Choo Yat Chiam, both now 37, who was riding pillion, to be flung from the vehicle.

The Mercedes finally came to a halt after hitting the wall.

No mechanical defects were found on Lim's car.

The damaged bus cost more than $27,000 to repair, while the other three vehicles were scrapped. The damaged wall cladding on the AYE was repaired at a cost of more than $1,300.

Referring to sentencing guidelines, Deputy Public Prosecutor Kumaresan Gohulabalan argued that but for Lim's mental condition, he would be facing a starting-point jail term of at least 41/2 years for showing an "extremely high degree of rashness".

The DPP said Lim should be jailed at least two years, after taking into account his mental condition and applying a discount for his guilty plea. Defence counsel Yusfiyanto Yatiman argued that Lim was remorseful and a first offender, and that his acute psychosis had diluted his culpability.