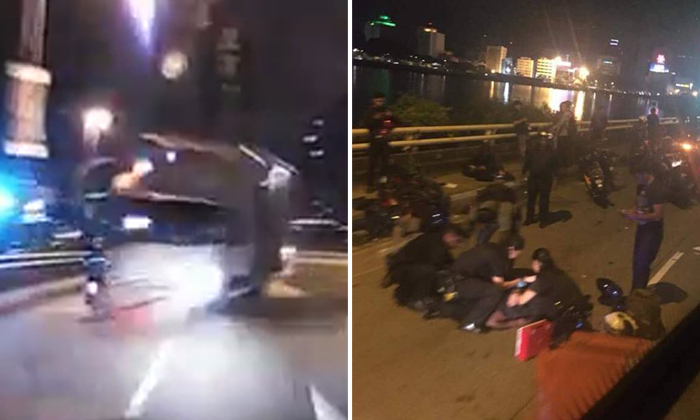 Two people were killed and three others were injured in an accident involving a trailer, a lorry and three motorcycles along the Causeway on Saturday (June 30).

The trailer driver and the lorry driver were subsequently arrested, police told Stomp.

In response to Stomp queries, the Singapore Civil Defence Force (SCDF) said it received a call for assistance at about 1am from Woodlands Causeway Bridge.

Three ambulances and one fire engine were dispatched to the scene.

A 21-year-old man was pronounced dead at the scene by paramedics.

A 42-year-old motorcyclist was unconscious when sent to Khoo Teck Puat Hospital, where he subsequently succumbed to his injuries.

Two other men, a 23-year-old lorry driver and a 37-year-old motorcyclist, were conscious when taken to hospital.

According to the SCDF, another man sustained minor abrasions and refused conveyance to hospital.

Stomp understands that he was a passenger on the lorry.

Stomp understands that all the men involved are Malaysians, apart from the 42-year-old motorcyclist, who is a Singapore permanent resident.

Stomper Fadhli told Stomp that he was stuck for 30 minutes in traffic jam that resulted from the accident.

Fadhli, who submitted videos of the jam, said: "The Immigration and Checkpoints Authority (ICA) closed all the lanes and we couldn't enter Woodlands Checkpoint."

Videos taken at the accident site have also been circulating on social media.

A nine-second clip posted by 'Nan Xing claypot rice' on Facebook shows a lorry that appeared to be travelling from the opposite side of the road, before veering into the opposing lane and hurtling against traffic.

The lorry appeared to narrowly miss a motorcyclist.

Another video shows a death tent and several police vehicles at the scene.

[30 June, 2.30am] A traffic accident has occurred at the Causeway. The departure lanes are closed temporarily. Travellers are advised to use Tuas checkpoint should they need to depart the country urgently.

Facebook user Nor Aqlaa shared pictures and a video showing paramedics attending to victims who were lying on the road. 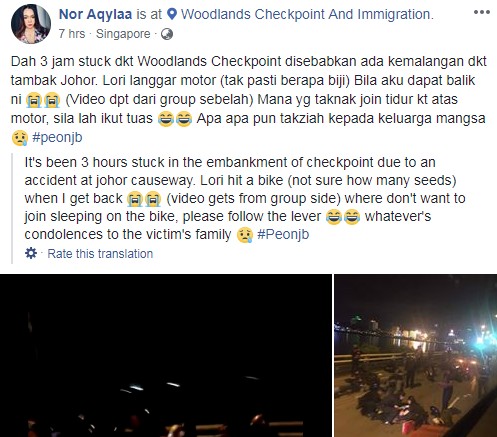 The ICA posted on Facebook at 2.30am that "a traffic accident has occurred at the Causeway" and that "the departure lanes are closed temporarily".

In an update at 8am, it wrote: "All departure lanes at the Causeway have re-opened and operations at Woodlands Checkpoint have resumed normalcy."

[30 June, 2.30am] A traffic accident has occurred at the Causeway. The departure lanes are closed temporarily. Travellers are advised to use Tuas checkpoint should they need to depart the country urgently.

[30 June, 4.55am] 2 out of 3 departure lanes have re-opened at Causeway. Travellers are advised to check One Motoring website before embarking on their journey.

[30 June, 8.00am] All Departure lanes at the Causeway have re-opened and operations at Woodlands checkpoint have resumed normalcy. We would like to thank travellers for their cooperation.