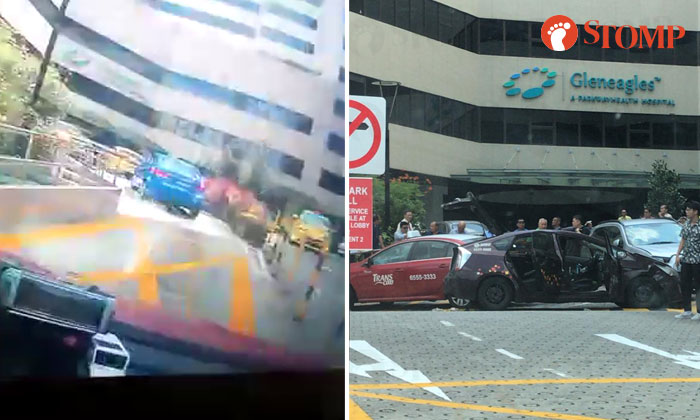 Video footage from an accident involving two cars and two taxis at Gleneagles Hospital on Thursday morning (Oct 4) shows how great the impact of the collision was.

A 70-year-old man died after an SMRT cab crashed into Trans-Cab taxi he was riding in with his 42-year-old son.

Stompers Sarah and Ivan alerted Stomp to the incident on Thursday and shared photos of it that had been circulating on WhatsApp.

In response to Stomp's media queries, the police said they were alerted to the accident at about 11.21am.

"One of the taxi drivers, a 62-year-old man was stabilised by medical staff from Gleneagles Hospital before he was conveyed conscious to National University Hospital (NUH)," a police spokesman said.

"Two passengers from another taxi, a 70-year-old man and a 42-year-old man received medical attention at Gleneagles Hospital.

"The 70-year-old man subsequently passed away."

Stomp understands that the 62-year-old man is the driver of the SMRT taxi.

Typically, Singapore Civil Defence Force ambulances take patients only to restructured public hospitals, which includes NUH. The man's transfer to another hospital could have been at his request or based on the recommendation of medical staff.

A Trans-Cab spokesman told The Straits Times (ST) that the left rear part of one of its taxis was damaged when an SMRT taxi crashed into it during the incident.

Video footage from the Trans-Cab taxi’s in-vehicle camera shows the cab shaking violently from a sudden impact. A person can be heard shouting in the background shortly after the collision.

According to ST, the passengers of the Trans-Cab, the 70-year-old man and his son, are from Indonesia.

The older man was on his way for a check-up for his heart condition and intended to return to Indonesia after his medical appointment at Gleneagles Hospital.

After the accident, the 42-year-old was seen exiting the taxi, before fainting. The 70-year-old was not seen getting out of the vehicle.

It is understood that the accident happened when one of the taxi drivers attempted to drop off a passenger at the hospital. Instead of stepping on the brake pedal, the driver accidentally stepped on the accelerator.

This caused the taxi to suddenly surge forward and hit a car that was parked on its right.

It is understood that all those who were injured were attended to by staff from the accident and emergency department of Gleneagles Hospital.

Related Stories
Man, 70, dies after 4-vehicle accident outside Gleneagles Hospital
Toyota driver beats red light -- but will probably never do it again after suffering this impact
2 riders collide along Sims Avenue: 'Could have been disastrous for elderly couple who jaywalked'
More About:
Accidents
death
injured
hospital
car crash
collision