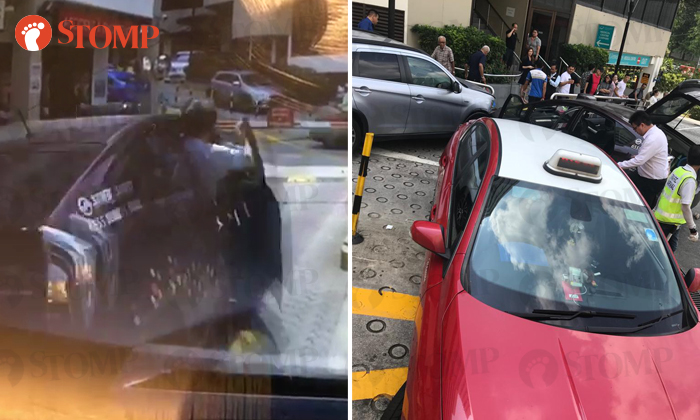 A new video of the four-vehicle accident outside Gleneagles Hospital that left one dead and one injured on Thursday (Oct 4) shows how the collision occurred.

Stompers Sarah and Ivan had alerted Stomp to the accident that occurred at around 11.20am, involving an SMRT taxi, a Trans-Cab taxi, and two cars.

The 62-year-old SMRT taxi driver was stabilised by medical staff from Gleneagles Hospital before he was conveyed conscious to National University Hospital (NUH).

Two Indonesian passengers on the Trans-Cab taxi, a 70-year-old man and a 42-year-old man, received medical attention at Gleneagles Hospital.

Police told Stomp that the 70-year-old man subsequently passed away.

According to an earlier Stomp report, the accident happened when one of the taxi drivers, now revealed to be the SMRT cabby, was dropping off a passenger at the hospital.

Instead of stepping on the brake pedal, the cabby accidentally stepped on the accelerator.

This caused the taxi to suddenly surge forward and hit a car that was parked on its right.

After hitting the car, the taxi continued to move forward and collided with the Trans-Cab taxi and another car.

Now, a new video circulating online shows how this sequence of events played out.

The SMRT taxi had not only hit the parked car, but also crashed through a carpark gantry arm, before colliding with the other two vehicles.

Stompers Helmi and Mike alerted Stomp to the video, which is believed to be from the dashboard camera of the parked car involved in the accident.

The SMRT taxi can be seen with both its left and right doors open as the vehicle surged through the gantry arm.

Earlier video footage from the Trans-Cab taxi had shown how the cab shook violently from being hit on its left by the SMRT taxi.