1 bus and 3 lorries in chain collision along Tampines 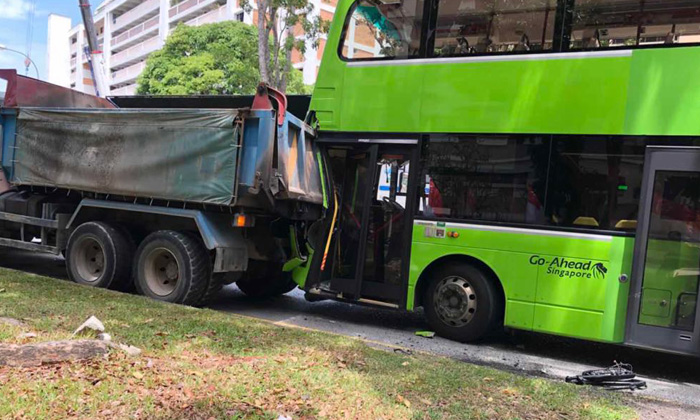 A bus crashed into a lorry that was parked along Tampines Street 31 at 12.23pm on Thursday (Aug 2).

Stomp understands that the accident resulted in a chain collision, as the impact from the bus caused the lorry to lunge forward, hitting two other parked lorries that were in front of it.

There were no drivers in the three lorries that were parked by the side of the road.

The driver of the bus and one female passenger on it sustained slight cuts, although both refused conveyance to a hospital.

Two Stompers alerted Stomp to a video and a photo of the incident that was circulated on WhatsApp.

In the video, the bus that was going at quite a slow speed, is seen colliding into one of the lorries that was stationary.

Shards of glass are also seen flying the moment the bus' windscreen came into contact with the lorry.

The lorry was also propelled forward due to the impact of the collision.

Stomp also understands that the bus driver had wanted to change lanes but did not notice the lorry, hence banging into it.

Related Stories
This is why you shouldn't cut across multiple lanes
Female driver suddenly jams on brakes at amber light, causing Stomper to crash into car's rear
Front of Honda wrecked after Audi coming from opposite direction collides into it at Holland Rd
More About:
chain collision
collision
accident
Bus
truck