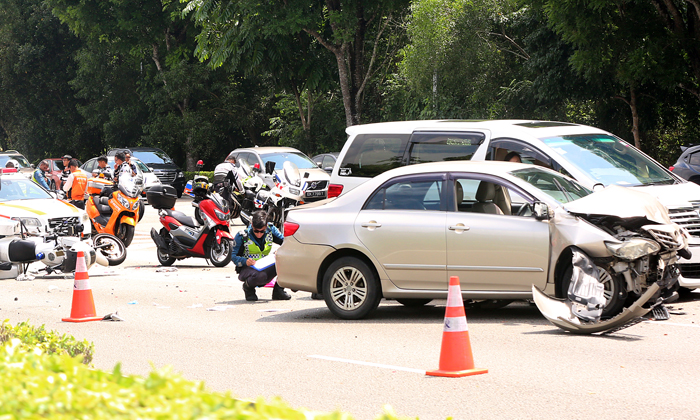 Stomper Farris alerted Stomp to one of the accidents while he was in a Grab on the expressway.

The police told Stomp they were alerted at 11.15am to an accident involving two cars and a tipper truck along the PIE towards Changi Airport, before the Bukit Timah Expressway (BKE) exit.

They added that a car had hit the TP officer and SCDF paramedic who were attending to the earlier accidents.

In response to a Stomp query, the police said:

"On 9 June 2019 at about 11.15am, the Police were alerted to an accident involving two cars and a tipper truck along the PIE towards the direction of Changi Airport, before the BKE exit.

"Two motorcyclists had also self-skidded in separate accidents, at the location of the first accident, after it occurred.

"The car hit a 30-year-old Traffic Police officer and a 26 year-old SCDF Paramedic who were attending to the earlier accidents, and the two motorcyclists, aged 35 and 37, who were moving their bikes away to avoid obstructing traffic.

"Four other persons, aged between 25 and 69, who were involved in the earlier accidents, were also indirectly injured by the impact.

"All the eight injured persons were conveyed conscious to the hospital.

"The Police have arrested the 44-year-old driver of the third car for rash act causing grievous hurt.”