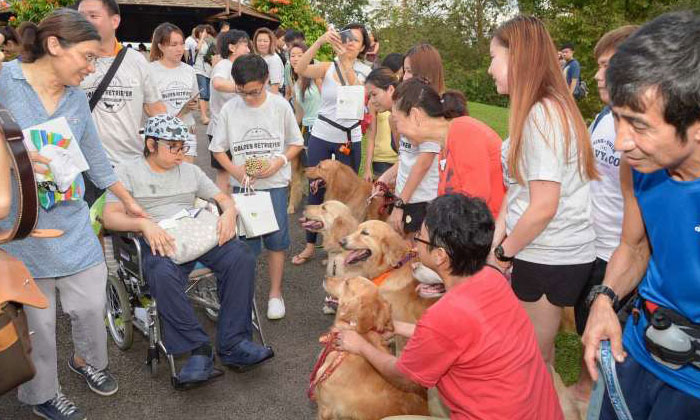 The 13-year-old boy with brain cancer who had a wish to have his fill of patting golden retrievers died on Sunday (Oct 30).

Lahl Isaac, who turned 13 last month, got his wish fulfilled when about 100 golden retrievers showed up at the Botanic Gardens for his birthday party on Sept 17.

The party, organised by ophthalmologist Leo Seo Wei and other golden retriever owners, drew a crowd of about 200 people, many of whom came with gifts for the boy.

Isaac's mother, Madam Tan Mei Lee, 54, told The Straits Times that her son was admitted to KK Women's and Children's Hospital on Tuesday (Oct 25) with a high fever.

"His tumour had affected his organs. He had weak lungs and had to use a ventilator," said Madam Tan, who teaches at the Movement for the Intellectually Disabled of Singapore.

"The doctors said he wouldn't last the weekend. He wanted to go home, so we rushed him home."

Isaac was discharged on Saturday (Oct 29) and died the next day at home. He was buried on Monday (Oct 31).

"I feel it was a bit sudden," said Madam Tan. "I did not expect him to go so soon. I was hoping for his condition to improve."

"At least he's not suffering. I miss him."

Dr Leo, who shared the news of Isaac's death with the Golden Retriever Club - Singapore Facebook group, wrote: "His parents reiterated their gratitude to all who helped to make "Isaac's 13th birthday with the golden retrievers" a success.

Isaac truly loved dogs. When we visited him a few days ago and presented him with a golden retriever dog model, his eyes lit up."

Dr Leo said she visited Isaac in the hospital on Thursday (Oct 27) with her husband and son.

She told The Straits Times: "I am quite shocked. He was still in good spirits when we saw him on Thursday.

"He held the golden retriever figurine I bought him. He smiled and his eyes lit up. He was so happy.

"He was even keen to join me and some other volunteers at a dog cafe this Saturday(Nov 5)."

Dr Leo added that she will remember Isaac for his positive spirit.

"Sometimes we get caught up with our lives and forget the simple things that matter," she said.

"Isaac showed us how the simple things which we take for granted could light up his life. It made a difference to him."

Madam Tan said she wanted to thank everyone who helped Isaac, including those who came for the golden retriever party, the hospital staff, as well as the Make-A-Wish Foundation.

The foundation, which grants wishes to children with life-threatening illnesses, sponsored a trip to Tokyo in August for Isaac, his parents and his older sister.

There, Isaac got to visit the Pokemon Centre, the zoo and an owl cafe, among other things.

Madam Tan added that many people contacted her to offer help after the article on the golden retriever gathering came out.

Former Malaysian politician Tan Sri Lim Ah Lek even went as far as introducing them to a sinseh in Kuala Lumpur and paying for two rounds of treatment, which included acupuncture and herbs, said Madam Tan.

"He was a stranger but yet he was so kind and so concerned," said Madam Tan.

"I really want to thank him and everyone else for their kind thoughts."