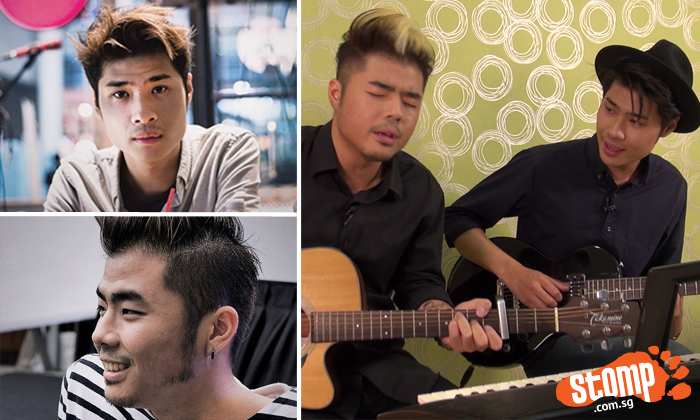 Besides their flair for music, fluency in French and striking good looks, what else do brothers Amos and Adam Ang from local band, Scarlet Avenue, have in common?

Their love and admiration for each other.

This is evident throughout the entire 1.5-hour interview that Stomp had with the charismatic pop duo, whose full-length debut album '2024' topped the iTunes chart on the very first day of its release.

Made up of 24-year-old Amos and 20-year-old Adam, Scarlet Avenue's musical journey started in France, where they lived for six years.

Singing, playing the guitar and song-writing was second nature for the boys.

"I remember, you know, I started listening to music and [Adam] picked it up from the elder brother," said Amos.

Speaking of their time in France, he continued, "During the holidays, I would find some things to do and one of them was that I picked up [playing] the guitar."

Stomp played witness to the brothers' talent when they performed three songs on the spot for us: 'Paper Plane' which is a Scarlet Avenue original, James Bay's popular hit 'Hold Back The River', as well as French song 'Serre-moi' by Tryo.

Let's just say that our journalist was very serenaded and would not have minded in the least if they had performed their full album.

Besides their impressive vocals, the chemistry between Amos and Adam is another thing that you simply cannot miss.

Both had the identical response in mind when asked to drop a pick-up line in French, as well as showed a bond that you share with only the closest of people during a fun round of quick-fire questions with Stomp.

The guys were quizzed on things like who they thought was the brainier or more attractive brother.

Their answers were almost never the same -- but only because of how highly they think of each other and how much they understand each other.

For instance, when asked who they felt was more talented, Amos said it was Adam -- "because this is what elder brothers do."

Watch the videos below to find out more about Amos and Adam.

Related Stories
Local band sings about finding love on the MRT
People will be flocking down to the karung guni after hearing this epic remix
As if you can't get enough of the PPAP song... here's the longer version
Scarlet Avenue
Amos and Adam Ang
music
talent
amazing people
local
celebrities
beauty
Realife