2 kids and a 6-pack: How Hot Mama goes from flab to fab 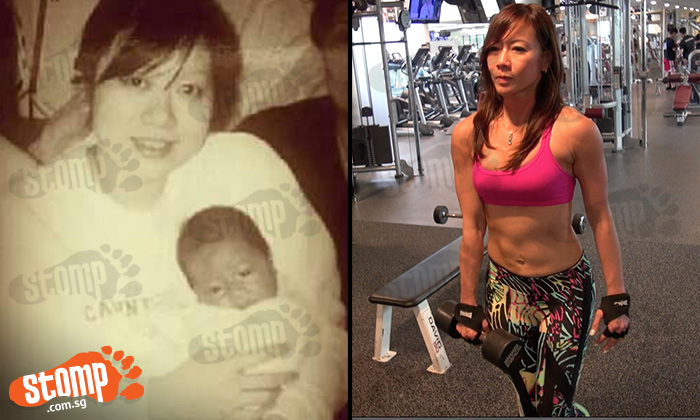 Gillian Giam, a 45-year-old divorced mother of two, is the epitome of a late bloomer.

"My friends used to get all the hot guys and I got the leftovers," said the owner of swing yoga studio Motionwerkz, and a six-pack.

All the way until she was in her 40s, Gillian was always the nerdy girl who never got any attention from boys. She wore thick-framed glasses in her youth and piled on the pounds as years went by. When she hit her 30s, she was tipping the scales at 80kg.

Gillian attributed her weight problems to her body image issues. She lamented that she was not born skinny and did not feel confident about her body, which resulted in her yo-yo dieting.

She gorged, starved and tried nearly every crash diet. Gillian also suffered from emotional eating and ate-sweet foods especially-whenever she was feeling down.

At that time, she was working at a media company dealing with the night scene. That meant she was out drinking nearly every day till the wee hours of the morning.

The hard drinks and party lifestyle took a toll on her and she found herself feeling miserable. All the clubbing was taking a toll on her health and ageing her as well.

She was also constantly worrying about the calories and felt compelled to starve herself after “a big meal” and food felt more like a comfort than an enjoyment.

The turning point came when she realised that if she continued with such a lifestyle, she would become a burden to her kids.

She lost 20kg in a year, but admitted that she did not do it the healthy way.

“I starved myself...I asked my maid to cook a bag of stir-fried vegetables and I ate that for three meals. It wasn’t healthy and I fell sick often,” she recounted.

She kept her media job until she realised that not even yoga could help her slow down the ageing process.

Gillian found love for swing yoga during a trip to Bangkok and subsequently set up her own studio, Motionwerkz.

Swing yoga also pushed her to start going to the gym, which she hated at the beginning. Gillian forced herself to go because she realised that yoga was not giving her the strength she wanted.

It was there when she met her trainer, retired bodybuilder Agnes Quintessa Lee. It took her less than a year to build lean muscle, surprising even Lee.

Working out has given her a newfound energy that escaped her for the first 40 years of her life.

Gone are the days where she spent half the weekend vomiting into a toilet bowl. Exercise has transformed her into an “energiser bunny”.

“I had never worked out before till now, and I have so much energy,” Gillian laughed.

Being at the gym also shows her who her “true friends” are. When she started Motionwerkz and stopped partying, she lost many of her “friends”. But she has found new friends at the gym, like her trainer Agnes and Ivan Tan.

“They all have happy endorphins, we laugh a lot, joke a lot and we don’t complain. We lift each others’ moods up. I would rather have this then go to a bar and have everyone complain that their lives suck.”

While she can have any guy she wants now, Gillan says she is not looking. In fact, she had to fend off numerous advances from men.

Sexual labels disguised as compliments have been used on her numerous times and she has received many “interesting” comments on Facebook.

But she is not impressed: “To some people it is a compliment, but not for me. Especially not in front of my kids.”

For instance, the comments she gets on Facebook make her a bit uncomfortable because her kids can see it.

But in real life, when people try to hit on her, “I usually try not to make eye contact,” she laughs.

Even with compliments from guys and girls alike, Gillian admits that she is not used to people calling her “hot”. Having been overweight all her life, she still sees herself as such sometimes.

Gillian also does not want to be someone’s “after” picture inspiration. Instead, she wants to promote emotional and body awareness.

“If people don’t get over the emotional burden, they may lose weight but put it on again and again. Or I know people who become very obsessed with exercising because they lost so much weight, but they are still not happy.”