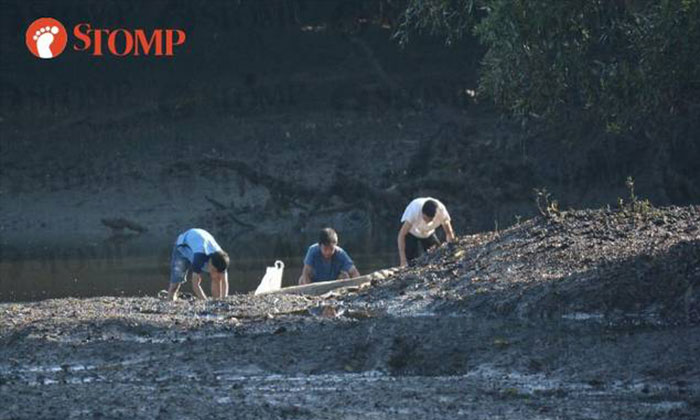 A day of fun turned into that of disappointment for Stomper Ben Lee after seeing some men digging at a mudflat at Sungei Buloh Wetland Reserve, in an alleged hunt for small shellfish and crustaceans.

Ben, who took a day off to observe migratory birds at Sungei Buloh on Sunday (Dec 3), told Stomp that he spotted three men at around 5.21pm digging at one of the mudflats.

According to Ben, the three men grabbed the wildlife creatures off the shores and threw them into a large plastic bag.

Ben Lee, the founder of Nature Trekker, a nature conservation organisation, also shared his views on what he witnessed: "A nature reserve is a place for the preservation and protection of wildlife and such illegal activity should not be allowed to happen."

"Therefore, the taking or removing of wildlife is considered illegal and within the ambit of the law."

Ben also alerted the National Parks Board, and an officer was soon dispatched to the scene.

The officer confiscated the items from the men, reports The Straits Times.

Ben Lee said that during that time, he, as well as five or six people who were with him, stood at the bridge to block off the exit.

He also offered his take on the men's 'poaching' activity, citing that they had most likely dug up the creatures for personal consumption or sale to interested parties.