Plagued by rats? This snake hiding in your air-con unit will take care of it 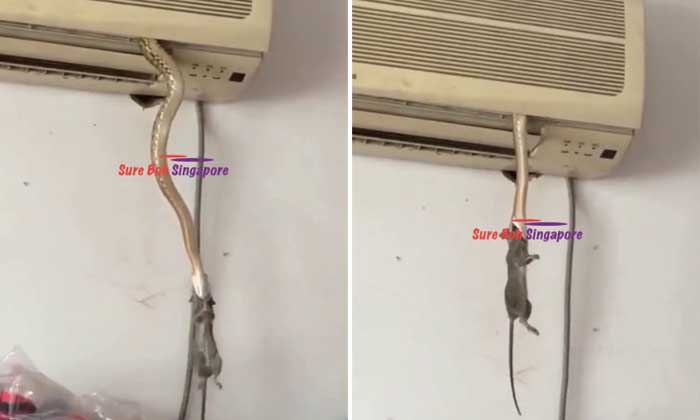 Most of us hate the thought of having even a single rat in our home.

For some reason, rats just bring out so much hatred in us.

But sometimes, nature has a way of solving such problems, such as having a snake hide in your air-conditioning unit.

That's right. That is exactly what one person found in this home.

A clip shared on SBS - Sure Boh Singapore shows a snake dangling out of an air-con unit with a rat between its jaws.

The resident calmly films as the snake slithers back into the air-con unit with its meal.

We hope someone called pest control too deal with the matter in a safe manner.

Otherwise, you could just move homes, just to be extra safe.

It is unclear where or when this incident occurred.

Related Stories
Woman finds snake in toilet bowl -- then discovers 23 more of them in her house
Diners panic during 'snake invasion' at coffeeshop -- but uncle continues eating beehoon like a boss
If this video of a snake regurgitating another live snake doesn't make you cringe, nothing will
More About:
rats
snakes
animals