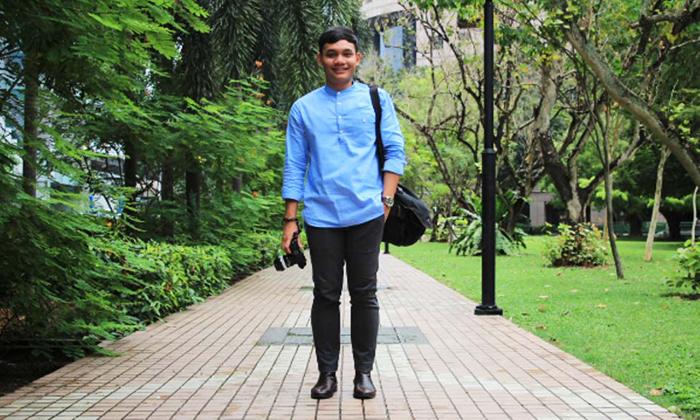 He has slept in squalid refugee tents, been struck by a rock in a riot and tried to smuggle himself into a detention centre.

One thing's for sure though, if undergraduate Arif Nurhakim could choose to do it all over again, he would.

"I look out for stories when I travel. Partly because I want to find meaning in everything that I do," he said.

In an age where travel photographers are taking the blogosphere by storm, Mr Hakim is among the rare few who go beyond a pretty picture.

"If I'm able to interact and gain stories from people I meet on my trips, then it will be a lot more meaningful than just taking photos of landscapes," he told AsiaOne in an interview.

And he walks the talk too.

While his peers opted for a leisurely tour around Europe after their overseas exchange programmes, the 25-year-old struck an exceptional figure by venturing into the ugly political fray of sensitive migrant issues.

In May this year, the final year student from the National University of Singapore (NUS) completed his four-month exchange programme in Paris and headed straight to Greece to volunteer his services as a freelance photojournalist.

Although his work in conflict areas is fraught with risks, he says his family has been supportive. "As long as I stay on the right side of the law and respect boundaries, they are reassured," he said.

But he has had his fair share of sticky situations - such as having his head stitched up after a protester flung a rock at him in the middle of the Loi Travail riot in Paris.

Even though he was cautioned against standing with the police to avoid being a target-board in riots, he inadvertently landed on the wrong side in the ensuing chaos.

"I had my eye trained on the viewfinder and didn't realise that the police were charging towards the protestors. Suddenly I found myself standing with the police. The moment I put down my camera I was hit on the head."

He has even tried to sneak into a detention centre in Moria Camp, in Lesbos - the Greek gateway to the Middle East, under the guise of a food vendor, but another journalist who had secured the contact went in instead.

The political science student admitted that his interest in photography and migrant issues influenced his foray into photojournalism.

"When the whole Syrian refugee crisis peaked last year, I decided to plan my exchange programme in Europe so that I could have fast access to the hotspots," he said. He confessed that he struggled over giving up an exchange opportunity in New Zealand, a destination he had always dreamed of visiting.

It took him nearly a year to analyse the situation in Europe, establish contacts and plan his itinerary around the region.

Mr Hakim attended Sciences Po University while in Paris from January to April before scooting off to Greece in May. During that trip, he was on assignment for UK-based Entitled Magazine.

But as Mr Hakim explained, the one month he spent was also a personal responsibility as a privileged individual to start a conversation in Singapore.

"There is a lack of interest among Singaporeans on this topic. While we are geographically too detached from what is happening, we should still be concerned that such a large scale issue exists in the world," he told AsiaOne.

He also realised that nobody was talking about the Greeks' hospitality, one of the first people to grant refugees asylum.

Fortunately for Mr Hakim, the volunteer groups and government officials in Greece were receptive to relief efforts and journalists, so getting into camps and speaking to the local volunteers and residents around the region was not a problem.

At one point while authorities were clearing out the camp, a few refugees whom he had struck up a close friendship with revealed their plans to sneak across the border that same night. It was a pivotal moment for Mr Hakim, who understood that he would never see them again.

"It still eats at me sometimes. I will never know if they crossed the border or if they were caught and shot down. I could only hug them and send them along with my prayers," he recalled.

"I recognise that it takes a lot for these people to open up to me. Throughout the entire process, I feel that I'm taking a lot from them. So I wanted to go back, curate these experiences and give back," Mr Hakim said.

He has since halted the fundraiser and returned to Greece on July 20 to buy the necessary supplies for the refugees. It will resume when he returns from his trip.

Disaster zones are intense, and no amount of research was enough to prepare him when he finally entered the fracas. The problem as it turned out, was more insidious and psychological.

"You never truly shed the emotional baggage. Disaster-stricken areas expose you to the unfiltered hopes and unrealized dreams of these people. And when you know that as an individual you can't do anything to help them, it weighs you down," Mr Hakim admitted.

While covering the aftermath of the Nepal earthquake last year, he interviewed a widow who had recently lost her entire family to the earthquake.

He asked her how it felt to be the sole survivor in the family. There was a brief 10 to 15 seconds of silence which culminated in so much tension that he had to stop the interview.

"Never before in my life had I encountered a moment where silence was a stronger language than words. Her tears were silent. But so impactful.

"I saw first-hand the cost of humanity in any disaster. I think this is very important in journalism - when we want to report on things like these, we cannot overlook the human side of things.