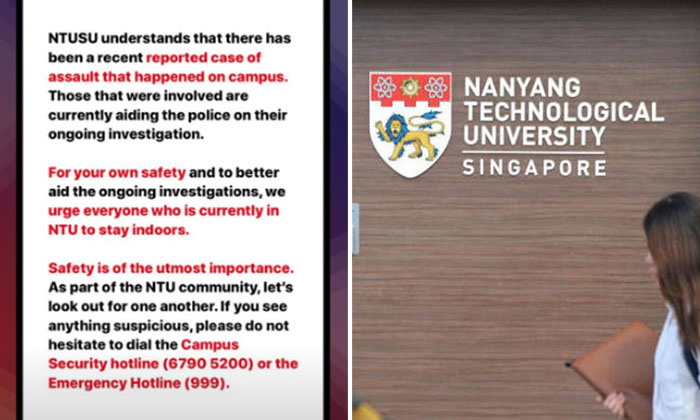 A 19-year-old student from Nanyang Technological University (NTU) is currently being investigated for providing false information after police were alerted to a case of alleged assault at Nanyang Walk at about 6.24pm on Saturday (Dec 14).

NTU Student Union shared in an InstaStory at about 2am on Sunday (Dec 15) that there was a recent reported case of assault on NTU's campus, where those involved were aiding the police with their investigations. 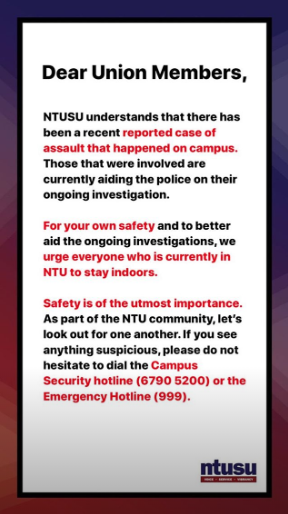 The University would like to assure all students that there is no cause for concern for their safety on campus. NTU is working with the police and an official statement will be issued later today.

NTU posted an official statement about the incident in a Twitter post at about 10.50am on Dec 15:

NTU would like to assure the NTU community there is no cause for concern about their safety on campus. We urge everyone to refrain from commenting or speculating on the case to avoid causing unnecessary alarm. Here is the University’s official statement on last night's incident. pic.twitter.com/MbCYMaAoOQ

They are also "reaching out to affected students to provide them with necessary care and support from the University's pastoral care team."

In response to Stomp queries, the police said: "At 6.24pm on Dec 14, the police were alerted to a case of an alleged assault on a female NTU student along Nanyang Walk.

"Investigations subsequently revealed that the 19-year-old student had provided false information to the police and the alleged assault did not occur.

"The police are investigating her for providing false information.

"The police would like to urge members of the public to refrain from commenting or speculating on the case so as to avoid causing unnecessary alarm."