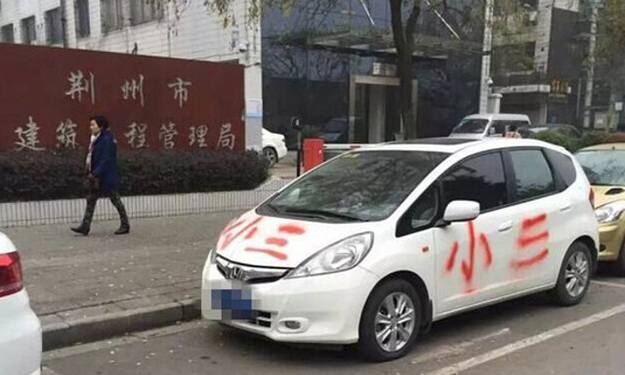 When a lady from Hubei, China found out that her husband was cheating on her with another woman, she made sure everyone else knew it, too.

She spray painted the word “Xiao San” (meaning “Mistress”) in red on all four sides of the mistress’ white Honda, reports Shanghaiist.

Citizens spotted the car in Jingzhou city on the morning of Jan 5, and uploaded photographs of the vandalised vehicle to Weibo, China’s most popular social media site, where it quickly went viral.

Within one day, netizens have managed to uncover that the owner of the Honda Fit is in her forties and works at a local bank.

Although the incident is undoubtedly humiliating for her, she actually fared better than many other mistresses in China, who were stripped in public or even murdered by the vengeful wives.