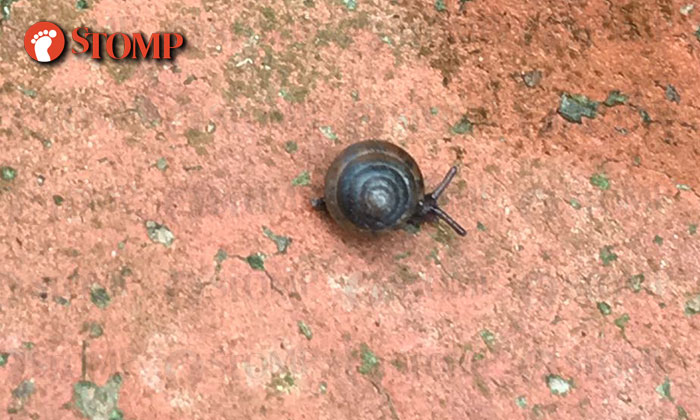 Stomper Lau Lup recently came across some 'alien-looking' creatures on Wednesday (Jun 14) in Woodlands while he was strolling along Woodlands.

Lau Lup said that the weird creatures emerged from a red brick wall after the morning rain.

He quickly took a video and some pictures of the unique snail.

"This particular type of snail is not the typical ones that we usually encounter after the rain.

"In fact the snail shell looked more like a stepped Pyramid of Djoser from ancient Egypt!

"This unique snail, similarly like the Djoser, also has 6 layers!"

"While marveling at the architectural wonder of the snail's home created by such a small lowly creature, I noticed another weird creature beside the snail.

"This creature seemed to be sipping rain water on the brick."

Lau Lup commented that the creature 'looked outlandish' and it's appearance looked weird mix between a cockroach and a crab.

Lau Lup was also surprised to find such interesting creatures living within the wall and quickly researched on it.

"I compared the pyramidal snail with the help of a guidebook on local mollusks after work.

Lau Lup's effort paid off and soon found a match in the guidebook.

"I was also surprised that the book's habitat description of this particular snail is in the forest instead of an urban setting.

"I'm really lucky to find them beside the pavement!"

Related Stories
What is this freaky creature spotted at City Hall MRT Station?
Do you know what this is? Strange cloth-like plant attracts large crowd at Woodlands shop
Dead plant surprisingly reincarnated into a beautiful flower
More About:
weird
creatures
snails
pyramid
egypt