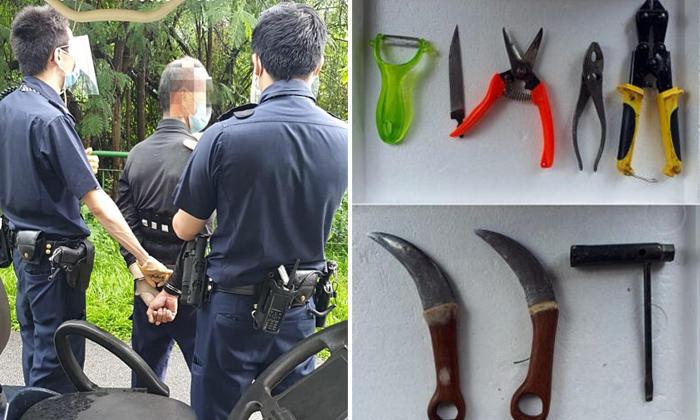 Amid tightened circuit breaker measures in 2020, a man went out to pick pandan leaves with a kerambit knife hidden in each shoe, and a walking stick with a concealed blade taped to his bicycle.

Ahirrudin Al-Had Haji Arrifin ended up repeatedly stabbing and slashing a National Parks Board (NParks) safe distancing enforcement officer who had asked him to wear a mask and took photographs of him as evidence of his failure to comply with Covid-19 regulations.

The 38-year-old officer suffered multiple injuries and long-term psychological trauma. His left thumb was almost severed in the attack and his left hand and fingers were permanently impaired.

On Monday (March 7), Ahirrudin, 62, cried as he pleaded guilty to a reduced charge of voluntarily causing grievous hurt to the officer by stabbing him with the bladed end of the walking stick and slashing him with one of the knives.

He was originally charged with attempted murder.

Ahirrudin also pleaded guilty to a charge of failing to wear a mask in public and a charge of possession of a scheduled weapon.

Three other charges were taken into consideration.

He asked the High Court to send a clear message that violence against public servants who are performing their duties "will be met with the full force of the law".

Defence counsel Rajan Supramaniam said his client feels very sad for the victim and was "immeasurably remorseful" for his impulsive act.

Sentencing has been adjourned to next week.

The court heard that on the morning of May 4, 2020, Ahirrudin left his Hougang flat and cycled to the Sungei Serangoon Park Connector to pick pandan leaves for cooking.

At about 11.45am, he was spotted by two NParks officers - the victim and a female colleague - who were putting up SafeEntry signs along the park connector.

The victim asked Ahirrudin why he had cut the pandan leaves and whether he had a mask.

Ahirrudin questioned the need to wear a mask and insisted that he was entitled to cut the pandan leaves. He became more agitated and retrieved the walking stick from his bicycle.

The officer photographed Ahirrudin and asked for his particulars, and called the police when the accused did not cooperate.

Ahirrudin then hurled vulgarities at the officer, who recorded a video of the accused on his phone. This further angered the accused.

Without warning, Ahirrudin removed the wooden sheath on the walking stick and stabbed the victim's chest with the concealed 20.8cm-long blade.

The victim tried to pull the blade out of his chest but Ahirrudin pushed it in.

In the ensuing struggle, Ahirrudin dropped the walking stick and slashed the victim with one of the knives from his shoe.

A passer-by intervened and held Ahirrudin down with his foot but the accused managed to stand up.

The two officers and the passer-by then ran away and called the police.

Ahirrudin was arrested later that day at about 1.15pm.

A psychiatric assessment found that Ahirrudin was not mentally disordered, intellectually disabled or cognitively impaired.

The victim, who underwent surgery and was hospitalised for four days, was given 89 days of medical leave in total.

After therapy and rehabilitation, the victim is back to an active lifestyle but the impairment to his hands makes certain tasks, such as tying shoelaces and tearing candy wrappers, difficult, according to medical reports submitted to the court.