Love Story: Our marriage has certainly stood the test of time, says wife of man who lost his hearing 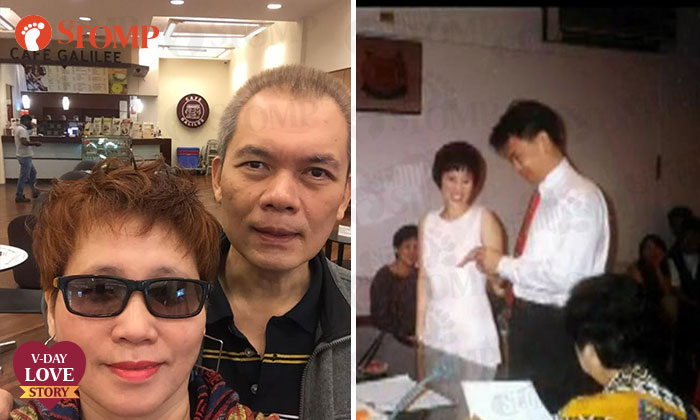 After consuming a plate of raw fish on Nov 19, 2015, Cathryn’s husband suffered from a Group B Streptococcus bacteria (GBS) infection and was hospitalised.

He subsequently lost hearing completely in his right ear and at least 90 per cent of hearing in his left and to this day, is still undergoing rehabilitation.

Due to his condition, he also lost his job.

Despite the tragedy that befell the family, Cathryn never left her partner’s side.

Cathryn took a 6-month leave of absence to care for her husband during the turbulent time.

When the time came to decide between her job of 23 years and her husband, Cathryn made the sacrifice.

Quitting her job so she could be his primary caregiver, Cathryn eventually became an author in Jan 2017.

Cathryn wrote about her experience caring for her husband in her book, ‘From RAW Meal To REAL Deal’ which was launched on April 28, 2017.

To engage his mind, Cathryn encouraged her husband to edit her books.

She also kept him connected with his friends and colleagues by becoming his ‘personal assistant’,  using mobile apps to share with his progress of the exchanges.

The couple also went overseas for a few short trips.

In November 2017, Cathryn’s husband enrolled in a six-week course for Persons with Disabilities (PWDs) at Enabling Village, a community centre.

Throughout the course, she would accompany him to the centre every week and waited patiently for him to finish the three-hour-long sessions.

Cathryn also ensured that claims forms and supporting documents were in place while filing for insurance claims.

“I never knew that marriage beyond 20 years could be this exciting!

“I never knew that we could communicate better in the world of silence.

“I never knew that fulfilling marriage can happen despite a disaster!

“One thing I’ve come to know, despite the silence and the disability that nearly wrecked our lives, our marriage has certainly stood the test of time.

“Mar 23, 2018, marks our 23rd wedding anniversary. I look forward to many more fulfilling years together as a couple for life!”

The contest is proudly sponsored by Stomp and Flower Advisor.

Related Stories
Love Story: I left my job to take care of my husband when he almost died and lost his hearing after eating raw fish
More About:
V-Day Love Story 2018