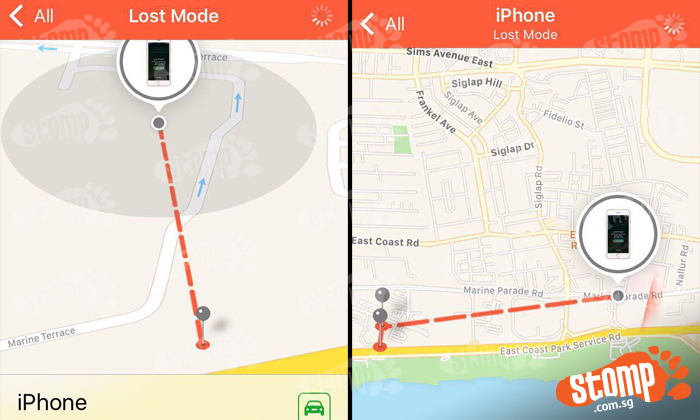 Stomper Diana is appealing for help in looking for her iPhone 7, which someone had definitely picked up after she lost it at East Coast Park yesterday (Jan 28).

She said that she and her husband have been tracing her device's location using the 'Find My iPhone' function. Its last known location was at the junction of Marine Parade Road and Siglap Link.

However, the one who has Diana's phone now has not been picking up her calls, even though the device is pretty much of no use to anyone but its original owner.

The Stomper, who is offering a reward for the return of her iPhone, said:

"In the vicinity of East Coast Park's McDonald's, next to the kids playground, I left my brand new iPhone 7 on the ground while attending to my kids at around 5pm.

"Some one took it.

"The 'Find My iPhone function' confirmed the location but the person refused to pick up my calls. The last location was at the junction of Marine Parade Road and Siglap Link.

"The phone is very important to me with my family pictures taken hours before. An iPhone without iCloud is useless.

"These snapshots were taken while my hubby and I were following the phone. We were also calling my number but nobody picked up."

When Stomp contacted Diana on Jan 29, she said the iPhone has been switched off.

Kindly contact us at stomp@stomp.com.sg or via WhatsApp at 9384 3761 if you have any information about the lost phone.

Related Stories
I lost my gold Samsung Galaxy S7 Edge on SBS bus 80 -- and it contains precious family photos
Reward offered for Samsung S7 that Stomper lost on Bus 185: 'It took me a long time to save up for it'
lost
lost phone
iphone