ITE's first blind student among top 5 per cent of cohort 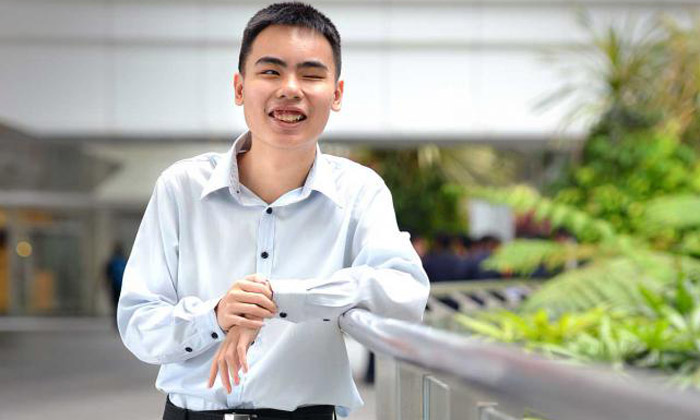 The Institute of Technical Education (ITE) was not his first choice, but he has never once regretted his decision.

Mr Lionel Tan was afraid of being bullied because he was ITE's first blind student.

But his perceptions about the school were debunked once he got to know his lecturers and schoolmates.

They not only cared for him, but also helped him with his studies.

Their efforts did not go to waste because the 20-year-old was in the top 5 per cent of this year's graduating class from ITE.

Mr Tan became blind when he was just a year old after suffering from retinoblastoma, the most common eye cancer in children.

First, his left eye had to be removed.

Then he became blind in his right eye when the cancer spread.

In 2014, he became the first blind student at ITE when he enrolled in ITE College Central in Ang Mo Kio.

He had hoped to enter a polytechnic but did not qualify.

It was a dream that was merely deferred, not shattered.

Last Friday, Mr Tan, who did a Nitec course in business services, received a Certificate of Merit, which is given to the top 5 per cent of ITE graduates.

He now plans to pursue a polytechnic diploma and fulfil his dream of becoming an entrepreneur one day.

He told The New Paper on Wednesday: "I've never thought of giving up. If you give up, you don't get to accomplish anything."

Mr Tan credits his success to support from his mother, lecturers and friends.

"Lionel is a role model for his classmates... (he) motivates them to work even harder," she said.

With help from the Learning Accessibility Office in ITE, Mr Tan uses Jaws (a text-to-speech software) and Braille Sense (a note-taking device) to support him in his learning.

He even uses WhatsApp to communicate with friends.

A buddy system allows him to move around the sprawling campus.

He said: "I am very grateful to have such understanding and supportive classmates."

His classmates even took time off their schedule to help him catch up on lessons whenever Mr Tan was unable to keep up in class.

But his road to success has not been easy.

When he was in secondary school, Mr Tan did not care about his studies.

His attitude improved after he met his English teacher in Secondary 4.

"She really pushed me to do my best. Then I knew I was able to do anything if I put my heart to it," he said.

Mr Tan, who used to take swimming lessons and was part of an a cappella group in school, added: "I don't let my impairment get in the way of learning new things. There are many things I'm able to do as well as anyone else."

Other award winners from ITE's graduating class of 2016

The awards ceremony for ITE's Graduating Class of 2016 was held last Friday at the ITE headquarters in Ang Mo Kio.

The Certificate of Merit was awarded to 675 students who were in the top 5 per cent of this year's graduating class.

Donated in 1999 by the late Mr Lee Kuan Yew from the sale of his memoirs, the LKY Gold Medal is awarded to the top graduate of each ITE College.

It recognises academic and co-curricular achievement, as well as contributions to the community and college.