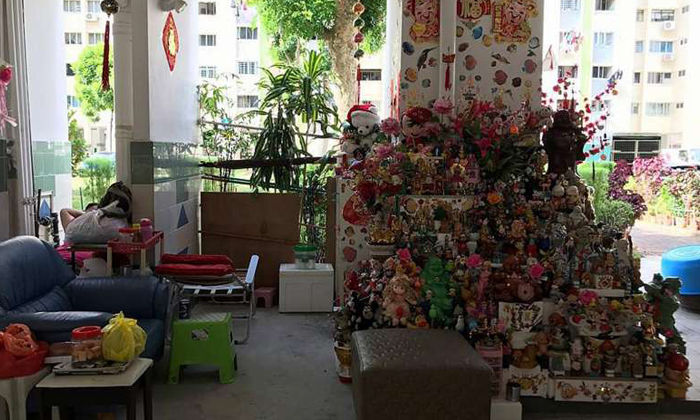 A pagoda-like tower of psychedelic toys, figurines and knick-knacks, erected late last year at a void deck in Yishun, had been described by some as an art installation worthy of a place in the Singapore Biennale. But it is gone now after the authorities, worried about fire safety, stepped in.

Residents in the area, who know him as "Ah Pek" (old man), contributed their old items to him.

The widower has four grown-up children and spends most of his day mingling with fellow retirees at his void deck. This was his attempt at beautifying the common area.

But as soon as it started gaining traction and fans, Mr Or said he was instructed to take it down by Nee Soon Town Council.

And so the structure came tumbling down last Thursday, and about 200 items were discarded.

Speaking to The Straits Times, Mr Or said: "It's the Government's area so I can't insist that it stays.

"Many of us male retirees in the neighbourhood hang around the void deck so my aim was to give people a chance to enjoy it and make everyone happy. "

Ms Shirley Soh, an artist who was part of the 2013 edition of the Singapore Biennale, a major contemporary art exhibition organised by the Singapore Art Museum, had noticed the installation when she was in the area. She said it was a great shame that it had to be dismantled.

"The creator definitely had an eye in the way the items were selected and placed. There was thought given to it. I was very impressed.

Five residents The Straits Times spoke to yesterday said the installation had not been in anyone's way.

Ms Fatimah Uni, 65, a kitchen helper, said Mr Or also started a garden at the foot of his block about seven years ago. "It was an interesting feature that brought some colour to the void deck. The Ah Pek has been very helpful around the area. We appreciate all he has done to make it a nice place," she added.

Nee Soon Town Council chairman Louis Ng said the town council received "a feedback" about items placed at the HDB block's Senior Citizens Corner. A Residents' Committee member then spoke to the senior citizens and told them not to store their items there.

"The items can pose a fire and safety hazard and we advise residents not to store their items at the void decks or social gathering points," said Mr Ng.