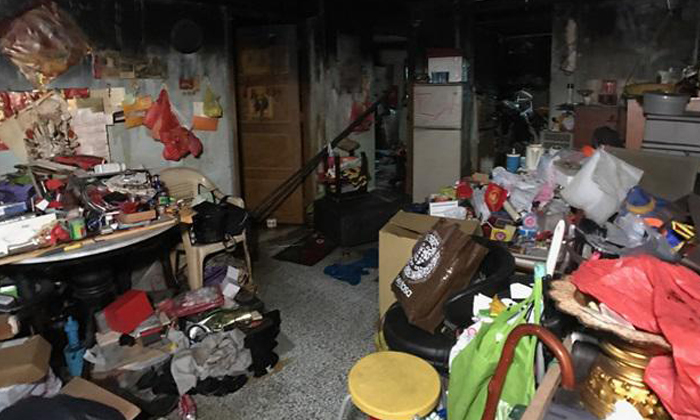 The two residents of the Sago Lane flat that caught fire early yesterday morning (Jan 23) almost burnt to death when they could not find their keys to exit the burning unit.

The three-room flat where the fire took place was found to be chock-full of clutter, Lianhe Wanbao reported.

The floor and table tops were piled with various objects such as newspapers, cardboard and plastic bags, as well as discarded electronics and old clothes.

Two elderly neighbours living opposite the affected unit told Wanbao that they had been roused from sleep by the sound of smashing glass. When they looked out of their kitchen window, they saw that their neighbour’s window had shattered and the interior was on fire.

However, the front door of the flat remained tightly locked.

The neighbours said they later found out that the two residents, a mother and her son, had been unable to find the key to unlock the front door. They managed to escape after the Singapore Civil Defence Force (SCDF) arrived.

It is understood that the son, in his sixties, is a karang guni (rag-and-bone man) who smokes. The mother is a lady in her eighties. Both were conveyed to the hospital for smoke inhalation.

The neighbour added that most residents of the block evacuated before the SCDF arrived.

It was earlier reported that the fire began in the kitchen. The SCDF is investigating the cause of the fire.