More oBike and ofo bikes being kept where they shouldn't be 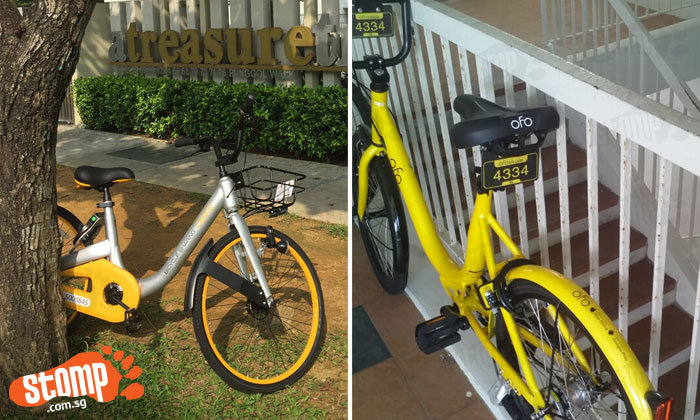 Stompers Paul, Joe and De Lin saw more oBike and ofo bikes being misused by members of the public.

Stomper Paul saw one oBike left leaning against a tree in front of A Treasure Trove condominium at 50 Punggol Walk this morning (Apr 9) while De Lin saw an ofo bike parked near the staircase of Block 57 Geylang Bahru on the 18th floor.

Joe said whoever parked it there was selfish:

"The condo has security guards that don't allow outsiders into the compound, depriving others from renting the oBike."

This comes just one day after four bikes were seen chained up and vandalised in Geylang Bahru as well.

Ofo and oBike are two of three companies offering bicycle sharing services for the public.

ofo made a post on their Facebook encouraging users to report bicycle issues and illegal behaviours via email at report-sg@ofo.so or by filling up this form.

They are also offering rewards to users who help them move improperly parked bikes to designated parking areas this month with ofo vouchers ranging from $2 to $20.